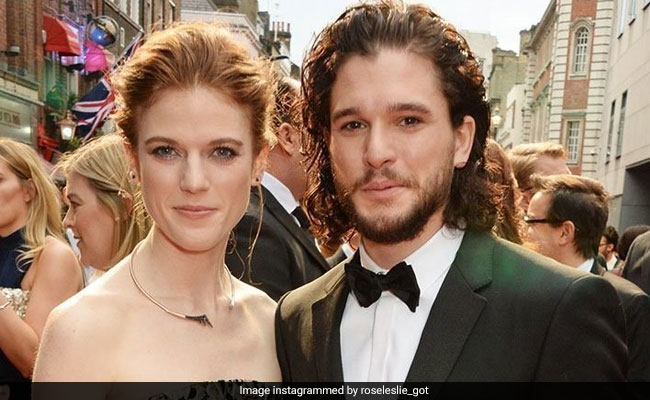 Headlines in the international press about Game Of Thrones actress Rose Leslie have triggered social media, which has rushed to defend Rose for attending a concert in the absence of husband Kit Harington who is currently in rehab. Sample headlines: 'Rose Leslie Spotted At Music Festival In London While Kit Harington Continues Treatment' in People, 'Rose Leslie Parties At Festival As Husband Kit Harington Checks Into Rehab' in Metro. The implied criticism has enraged Twitter, with several tweets shaming the publications and asking why the actress should confine herself to her home. Some tweets also pointed out that family and friends of those seeking help with mental health also have the right to cope as they decide best.

It has to be said that the media weren't the only culprits. Several Kit Harington fans and Jonerys shippers grabbed the opportunity to slip in comparisons between Rose Leslie and actress Emilia Clarke, who starred as Daenerys on Game Of Thrones.

Read some of the tweets defending Rose here:

What an awful headline shaming Rose Leslie for having some time for herself. Has none of you been through something similar? Terrible idea!

Shame on @MetroUK for this headline. Of course Rose Leslie should be enjoying herself! Do you know what mental illness does to partners/parents/children/friends? Tell me, what should she be doing instead? https://t.co/bo1FFWHIgd

Soooooooo what she's supposed to stay at home? #OpinionChallenge#KitHarington#STFU#lol#leaveheralone#BREAKING

No dog in the fight, but I think it's wack people are shitting on Rose Leslie for living her life while her husband seeks help. Not like she can be there with him, and people who love people getting help have every right to struggle and deal with said struggle however they please

ROSE LESLIE IS ALLOWED TO CONTINUE LIVING HER LIFE EVEN THOUGH HER HUSBAND IS IN TREATMENT. GOD DAMN IT LEAVE THESE PEOPLE ALONE.

Anyone who doesn't see anything wrong in this headline is a fool. Why not "Rose Leslie spotted at festival" full stop!

i don't know a damn thing about rose leslie or her relationship with kit but some of y'alls hatred for women is showing. she's allowed to have a life and ya know, laugh. she doesn't have to be locked in a room crying over kit 24/7 to be a supportive wife. stop hating women 2k19.

Kit Harington has been in a wellness centre for over a month now, it was revealed last week. The 32-year-old actor checked himself in for treatment related to stress and alcohol issues. Kit reportedly had trouble dealing with the end of Game Of Thrones and has previously said he sought therapy after struggling with his character Jon Snow's story arc a couple of seasons ago.

Rose Leslie played the wildling warrior Ygritte on Game Of Thrones - her character, the love interest of Jon Snow, died in Season 4.

While Ygritte and Jon didn't get a happy ending - complicated by Jon Snow's subsequent romance with his aunt Daenerys which also ended in tragedy - Rose Leslie and Kit Harington did. They married in 2018, in a ceremony to which several Game Of Thrones co-stars were invited.

The music festival that Rose Leslie attended was held in London. The actress watched Bon Iver perform. She was with friends, including actress Carey Mulligan whose husband Marcus Mumford was among the headliners at the festival with his band Mumford And Sons.