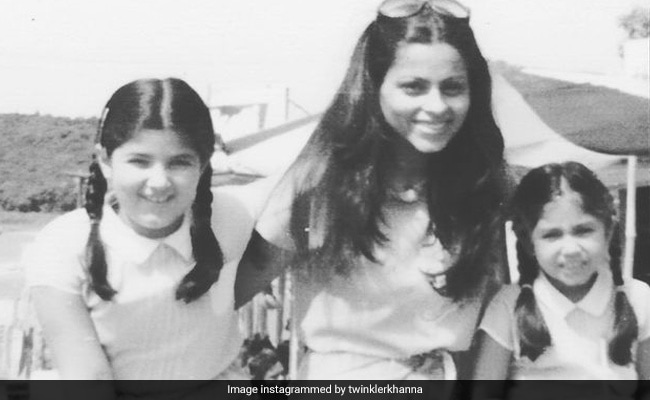 This Sunday is dedicated to minty Phantom cigarettes and sepia-tinted childhood games, at least in Twinkle Khanna's household. The wordsmith, who can weave warm tales under the garb of Mrs Funnybones, is also adept at taking us on a walk down memory lane. And this time around, she is revisiting a special memory with sister Rinke Khanna and aunt Simple Kapadia. If you stumble upon Twinkle's Instagram page today, you will see a monochromatic photo of the trio smiling back at us. While Twinkle and Rinke are the two smiling girls with braids, Simple Kapadia looks ethereal as she is flanked by her nieces on either side. She is seen taking the kids in her embrace by throwing her arm around them.

The caption is a lovely ode to the days of the past and coming from Twinkle it is no surprise. "Nostalgia is akin to the red and white Phantom cigarettes of our childhood. Like all sugary treats, it may prove detrimental as a daily habit, but it could provide occasional respite. A way of transporting ourselves to a time when we felt loved and safe, and sometimes, oh so cool, as we inhaled the minty smell of a candy-stick held between our lips. Nostalgia reminds us of not just how we lived, but what it was like to thrive," she said.

The post caught the attention of many B-town celebrities. Tahira Kashyap, author and wife to actor Ayushmann Khurrana, commented, "What a wonderful piece! I was reminded of the Citra days."

Twinkle's image took jewellery designer Farah Ali Khan back to her childhood.  She left her comment, "Omg Tina. I remember you like that." Farah is the daughter of actor Sanjay Khan.

Fans also showered much love on the trio after seeing this photo and we can't stop saying that we feel that tinge of nostalgia as well.

Twinkle loves to share moments spent with her family on her Instagram timelines. Once in a while, we get a glimpse of her mother Dimple Kapadia in her posts. This Mother's Day, they were both seen engaging in their hobbies, while chatting their hearts out.

She also often shares clips of her father Rajesh Khanna. Twinkle is often seen paying tribute to the late legendary actor on her social media timeline. Here's a video that Twinkle recently posted, where she wrote that she's got his eyes and her son, his smile. "The world has pieces of him embedded in their hearts," she added.

Twinkle Khanna is married to actor-producer Akshay Kumar. The couple has two children.