Twinkle Khanna's Spooky Halloween Post May Give You Goosebumps

The video Twinkle Khanna shared is not half as scary as the caption. 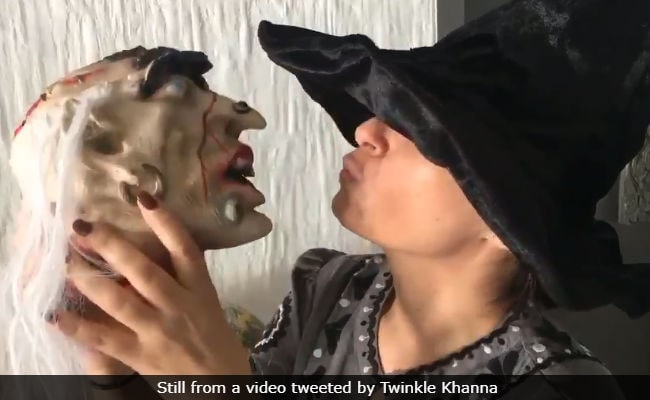 Twinkle Khanna sent out Halloween wishes to all the "horror movie connoisseurs" like herself with a video, in which the actress-turned-author (wearing a witch's hat) can be seen messing with a scary mask. But it was the spooky second part of her message which may give you goosebumps. She wrote: "To the naysayers I can only this - You may not believe in ghosts but what if the ghost believes in you?" *Yikes* No one can beat Twinkle Khanna's eerie Halloween post. Twinkle Khanna is the best-selling author of three books - Mrs FunnyBones, The Legend of Lakshmi Prasad and recently released Pyjamas Are Forgiving.

Happy Halloween to all the horror movie connoisseurs like moi! To the naysayers I can only say this-You may not believe in ghosts but what if the ghost believes in you? #Halloweenpic.twitter.com/gitXEUQZuh

Several Bollywood celebrities are celebrating Halloween in India with the same enthusiasm as it is celebrated abroad. On Wednesday, actress Soha Ali Khan shared a picture of her daughter Inaaya aptly dressed for a Halloween party while Preity Zinta, who divides her time between India and the US, also shared a picture of herself dressed for a Halloween event. Preity wrote: "Bringing up my wicked side ! Wishing y'all a super fun spook-taculer #HalloweenNight filled with magical surprises!"

Take a look at Soha and Preity's posts:

Peek a boooo!! #happyhalloween in case you are wondering I'm a size zero witch #scarytrends

Bringing up my wicked side ! Wishing y'all a super fun spook-taculer #HalloweenNight filled with magical surprises ! P.S. don't forget to tell me your favourite halloween character ! #Ting ! #HappyHalloween ! : @ashguptaslife @838mg

On Tuesday, actress Riya Sen also posted pictures from an early Halloween party she attended, for which she opted for an outfit inspired by one of this year's top horror films, The Nun: