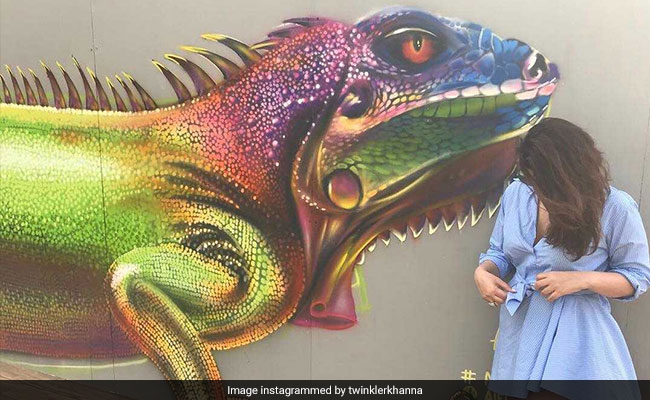 Twinkle Khanna surely knows how to brighten up even the simplest of pictures with her lit captions. The reason we brought this up today is because her latest Instagram post reminds us of just that. On Wednesday evening, Mrs Funnybones shared a picture of herself standing in front of a graffiti wall with a painting of a chameleon on it. However, it wouldn't be wrong to say that the major highlight of the post is Twinkle's caption. Twinkle added a dash of her signature humour to the post and wrote: "What do chameleons and keto addicts have in common? They both eat only protein and their breath is worse than their bite!" The 45-year-old author added the hashtag "#lamejokesrock" to the post. The post garnered over 1 lakh likes within a few hours.

What do chameleons and keto addicts have in common ? They both eat only protein and their breath is worse than their bite! #lamejokesrock

On Women's Day, Twinkle shared an extensive post on her Instagram profile, in which she chronicled her journey from an aspiring accountant to a Bollywood actress, to becoming one of the best-selling authors. "Sometimes you have to leave it loose, sometimes you have to hold on tight, sometimes your kite will fly effortlessly, sometimes you will not be able to control it and even when you are struggling to keep it afloat and the string is cutting into your hand, don't let go," read an excerpt from Twinkle Khanna's post.

Ever since I was a little girl, I always had my nose buried in books. Books were my escape, they were my solace. I would run away to have tea with Alice in Wonderland, hop from one ink-stained asteroid to another with the Little Prince. I even reached Mars with Philip K Dick, decades before the Mars Orbiter Mission. When I finished 12th grade, being rather academically inclined, I wanted to study to be an accountant. My parents though were both in the entertainment industry and were keen that I follow in their footsteps. Like many young people I caved in and joined the family business. Eight years later, I had to face the fact that I had spectacularly failed as an actress. I went through a brief period of despair, till I realized that having failed at something did not mean I was a failure, it just meant that I now had the opportunity to try and succeed at myriad other things. I decided to cut my losses not my wrists and went back to working around all the things I had always loved. Somewhere along that path, I found my place in the world of words, a place where I could finally thrive surrounded by my beloved books, both as a reader and now as a writer as well. If my journey has taught me one valuable lesson then it is the importance of being resilient. This is something I try and inculcate in my kids as well. I tell them and perhaps also end up reminding myself that life is just like flying a kite. Sometimes you have to leave it loose, sometimes you have to hold on tight, sometimes your kite will fly effortlessly, sometimes you will not be able to control it and even when you are struggling to keep it afloat and the string is cutting into your hand, don't let go. The wind will change in your favour once again. Just don't let go. #KohlerBoldStories #PechaKucha #WomensDay #Kohler

Twinkle actively shares posts pertaining to different facets of her life. From videos of her dog, to adorable pictures of her daughter Nitara, to mushy posts featuring her actor-husband Akshay Kumar- Twinkle's Instagram profile has it all. Take a look at some of the aforementioned posts here:

A tip for Indian men : A black woolly turtleneck can make most of you seem exponentially smarter, especially if you don't ask the woman sitting on the other side of your precious jar of granola what 'exponentially' means. Also it doesn't help if you call the other person 'Maha Pakau' when they try to give you the correct definition. #TravelDiaries

Stay still my love and watch the world closely-there will be fish,there will be the inevitable frogs,there will be unexamined pieces of you floating in shimmering ponds #BabaTwinkdev

Twinkle Khanna is a celebrated columnist and a best-selling author of three books- Pyjamas Are Forgiving, The Legend Of Lakshmi Prasad and Mrs Funnybones. Twinkle is also an interior decorator. She's the owner of The White Window (which operates in Mumbai).