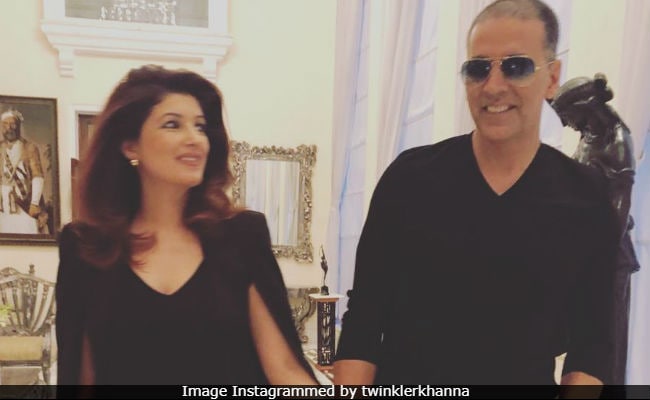 Remember what Twinkle Khanna posted after her actor husband Akshay Kumar "set himself on fire" for the announcement of his first web-series The End? On Saturday, Akshay shared a post, in which he dropped a major hint that another daredevil shoot is on the cards. But, to his post, he added a small note that read - "P.S. Don't tell my wife." The post features him with filmmaker Rohit Shetty and Akshay said that it's for Khatron Ke Khiladi. "It's a flaming week for Kesari. Warming up with Rohit Shetty for Khatron Ke Khiladi. Watch this space!! P.S. Don't tell my wife," read the 51-year-old's actor's tweet. Khatron Ke Khiladi currently airs on TV and it appears that Akshay shot for an episode earlier to promote Kesari, his next film.

It's a flaming week for #Kesari
Warming up with #RohitShetty for Khatron Ke Khiladi. Watch this space!!
P.S. Don't tell my Wife pic.twitter.com/BoP6P961DB

For Akshay's stunt earlier this week, Twinkle Khanna tweeted, "Crap! This is how I find out that you decided to set yourself on fire! Come home and I am going to kill you - in case you do survive this! #GodHelpMe."

Crap! This is how I find out that you decided to set yourself on fire ! Come home and I am going to kill you-in case you do survive this! #GodHelpMehttps://t.co/K7a7IbdvRN

The End is the working title of Akshay Kumar's upcoming web series. Of which, he said in a statement: "The digital world excited me and I am delighted to make my streaming debut with this show. If I were to make a small confession here, it was my son Aarav who suggested that I make my digital debut as that's what the youth is hooked onto. On this medium, I want to create something extraordinary and connect with them."

Aarav is Akshay Kumar and Twinkle Khanna's elder child and Nitara is the younger one.

Akshay's Kesari releases on March 21. He also has Housefull 4, Good News, Mission Mangal and Rohit Shetty's Sooryavanshi in the pipeline.