"Trying To Keep It Together" In 2020, Janhvi Kapoor Aced This Expression

"Trying to keep it together this year like," Janhvi Kapoor captioned her photo 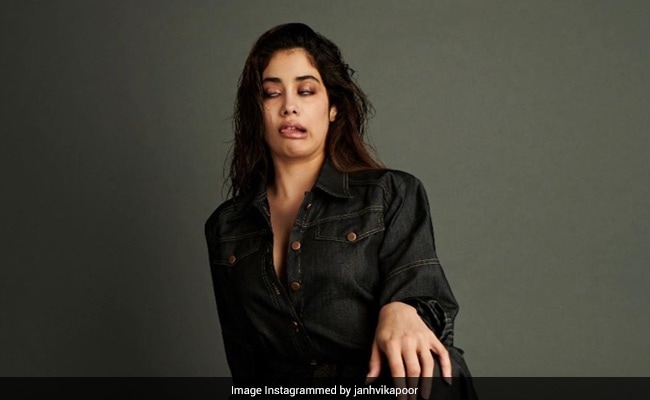 Janhvi Kapoor's Instagram posts are simple and full of spunk, just like her. In order to sum up her 2020 experience, Janhvi Kapoor shared a behind-the-scenes moment from what appears to be a fashion photoshoot on Instagram. Now that we are in December, the 23-year-old actress looked back at the months gone by and found one of her expressions, which got captured on camera, perfectly suitable to describe how 2020 has been to her. In the photo, Janhvi, dressed in a denim jumpsuit, can be seen sporting a rather quirky expression, best described by her in these words: "Trying to keep it together this year like."

We feel you, Janhvi. Swipe to see her ROFL photoshoot moment.

Janhvi Kapoor loves to add ROFL captions to her photoshoot moments. Here's when she added a hilarious twist to her blue eyeliner look: "A migraine and some blue eyeliner is a mood."

Janhvi Kapoor is also the undisputed queen of single-emoji captions. Here are some of the times she showed how emojis speak a thousand words.

Janhvi Kapoor stepped into Bollywood with 2018 movie Dhadak, which released just months after Sridevi's death. After that, Janhvi featured in one segment of the Netflix anthology Ghost Stories. Earlier this year, she played the titular role in Gunjan Saxena: The Kargil Girl, the biopic of Indian Air Force officer Gunjan Saxena. Janhvi Kapoor's upcoming list of films include Roohi Afzana, in which she co-stars with Rajkummar Rao, and also Dostana 2, co-starring Kartik Aaryan.