Trending: This Pic Sidharth Malhotra And Manoj Bajpayee From Sets Of Aiyaary 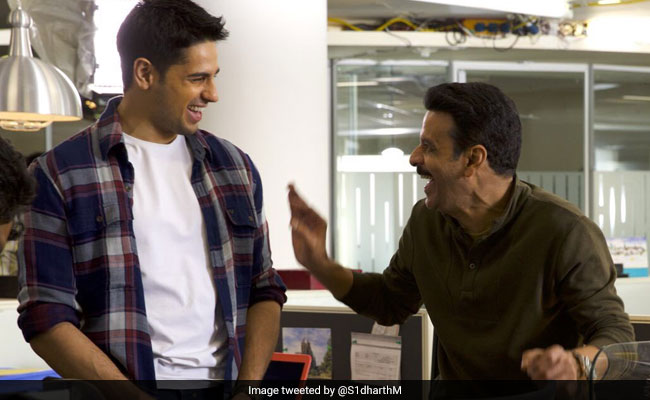 New Delhi: Actors Sidharth Malhotra and Manoj Bajpayee will soon share screen space in their upcoming film Aiyaary. Sidharth Malhotra delighted his fans by sharing a candid picture, from the sets of Aiyaary with his co-star Manoj Bajpayee. The Baar Baar Dekho star took to social media to share the photo with Manoj from the film's set where the duo can be seen indulged in a fun conversation. Manoj and Sidharth are all smiles in the picture and it is definitely a treat for the actors' fans. Sharing the photo, Sidharth wrote: "The deception ends soon! 2 Months To Aiyaary @BajpayeeManoj @aiyaary." Here's the picture, we are talking about:

Aiyaary, set in Delhi, London and Kashmir, revolves around two strong-minded army officers with different views, yet right in their own ways. It is a real-life story based on the relationship between a mentor and a protege. The film also features actress Rakul Preet Singh.

Of the film and co-star Sidharth, Manoj earlier told news agency IANS: "Sidharth is a great guy to work with and a great guy to know. We kind of developed some kind of fantastic bond while working for Aiyaary," Manoj told IANS over phone from Mumbai. Talking about the film, directed by Neeraj Pandey, Manoj described it as a "great script". "It is one of the best scripts I have been a part of. It's a story based on true events. It's about military intelligence and the people working for it."

Sidharth Malhotra was last seen in A Gentleman, co-starring Jacqueline Fernandez while Manjoj Bajpayee is also prepping for Rukh.

Promoted
Listen to the latest songs, only on JioSaavn.com
Aiyaary, which was due to release on January 26, 2018, will now hit the screens on February 9, 2018.