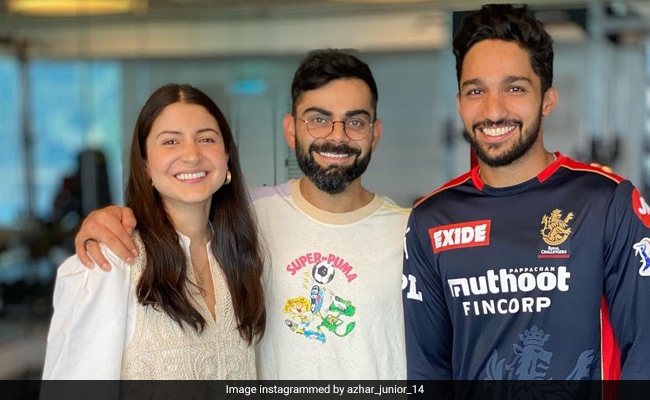 In the photo, the trio can be seen smiling ear-to-ear for the cameras. It appears to be a behind-the-scenes moment from Virat's IPL diaries - both Virat and Anushka can be seen dressed casually - Anushka looks cute as a button in a white shirt dress paired with a crochet crop jacket. Team Royal Challengers Bangalore are currently in Mumbai for the IPL.

We also recently got another glimpse of new parents Anushka Sharma and Virat Kohli's loved-up diaries on Instagram. Sharing a photo of the two hugging, Virat simply captioned it with the red heart emoji. Clearly, no words needed for this photo of Virat and Anushka. The couple welcomed a baby daughter, who they have named Vamika, on January 21.

In terms of work, Virat Kohli is currently busy with the ongoing Indian Premier League. In terms of films, Anushka Sharma was last seen in 2018 movie Zero, after which she produced OTT projects such as Paatal Lok and Bulbbul. Anushka's next production Qala, a Netflix original movie, will mark Irrfan Khan's son Babil's acting debut.