"One year ago I married this gorgeous man of my dreams," she wrote 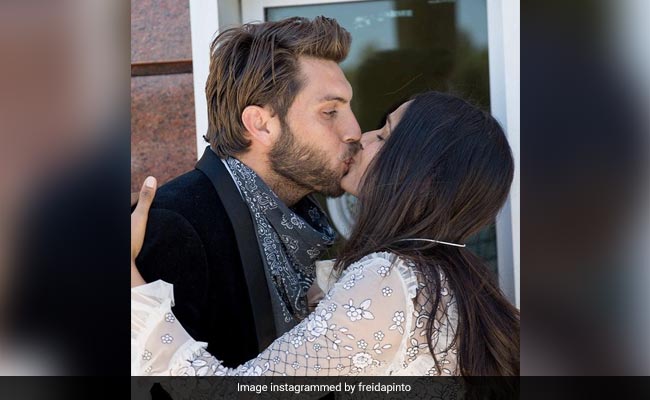 A picture from the wedding. (Image courtesy: freidapinto)

After confirming on The Kelly Clarkson Show that she is already married, Freida Pinto shared pictures from her impromptu wedding that took place last year. They got married at a Honda Centre in California. The actress married Cory Tran during the lockdown in California last year. The actress shared pictures from the wedding on social media and wrote: "Yes, yes, it's true. One year ago I married this gorgeous man of my dreams. No, we were not keeping it a secret or anything. We were simply just enjoying life and happily shared the news with anyone who asked." She added, "Cory and I believe so much in balancing spontaneity with just the right amount of planning. One day it felt so right and so genuinely aligned that we decided we wanted to make it official. This felt so special and fun and let's be honest... it reflected the time in our world just perfectly! The Honda centre has a whole new meaning in our lives now."

The Slumdog Millionaire actress, who is expecting her first child with Cory, shared pictures from her baby shower and she wrote: "Reminiscing about this sweet baby shower! Thank you to my awesome tribe of sisters who made this such a special day for me."

Freida Pinto has featured in films like Rise Of The Planet Of The Apes, Immortals, Trishna, Love Sonia and the Netflix movie Mowgli: Legend Of The Jungle. She also starred in Love, Wedding, Repeatand Hillbilly Elegy.