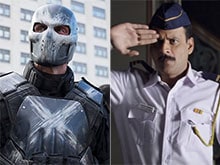 New Delhi: Actor Manoj Bajpayee's Traffic releases today. Traffic is a remake of the 2011 Malayalam film of the same name and stars Manoj as a traffic policeman. It is inspired by an actual event that happened in Chennai.

Other regional films like Yo! Yo! Honey Singh's Zorawar will release today.