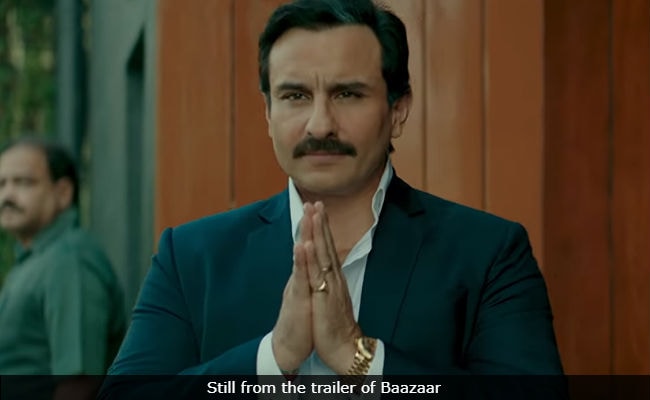 And it's time for Baazaar to open in theatres. Saif Ali Khan's first film after he featured in critically acclaimed web-series Sacred Games, Gauravv K Chawla-directed Baazaar is all about money making. Saif Ali Khan plays the role of Shakun Kothari, a sharp and shrewd 'Wolf Of Wallstreet,' who takes newcomer Rizwan Ahmed (played by Rohan Mehra) under his wing. The race to make money begins and the protagonists engage in deadly manoeuvring to cross the finish line first - because Shakun Kothari doesn't believe that life's a 'marathon.' Rizwan's only dream was to work with Shakun Kothari but he soon realises that his "God" is not flawless.

Baazaar is Rohan Mehra's, son of late actor Vinod Mehra, Bollywood debu . Rohan said that he was cast in the film because of his hard work and not because of he's a star kind. He told IANS: "When I learnt that Nikkhil sir (producer Nikkhil Advani) was making this film, I thought of auditioning for it. Initially, the film was supposed to have only established actors and they were not planning on taking newcomers. Eventually, they got convinced."

Meanwhile, today's second release is 5 Weddings starring Rajkummar Rao and Nargis Fakri. The Namrata Singh Gujral-directed film tells the story of an American journalist (Nargis Fakhri) who is assigned to write about Indian weddings. However, she digresses from her project after interacting with a group of transgender dancers. Her government assigned liaison officer, played by Rajkummar Rao, is told to put a stop to her endeavour.

Watch the trailer of 5 Weddings:

5 Weddings premiered worldwide at the Cannes Film festival in May.