Baazaar Trailer: Directed by Gauravv K Chawla, the film is set to hit the screens on October 26 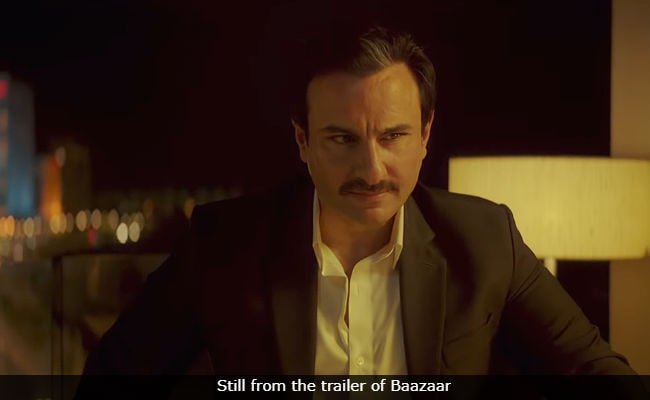 After sharing new posters of Baazaar, the filmmakers on Tuesday released the film's trailer and oh boy, it looks gripping. The trailer offers an overview of the film featuring Saif Ali Khan, Radhika Apte, Chitrangada Singh and Rohan Mehra. Shakun Kothari (Saif Ali Khan), an influential businessman, is someone who loves his money and loves to play the game by his rules. He is all about earning big money as quick as possible. When it comes to his money, Shakun will not tolerate anyone messing with it. Rizwan Ahmed (Rohan Mehra), also wants to be a businessman like Shakun Kothari and relocates from Allahabad to Mumbai to work with him. Rizwan is ambitious and he knows what it takes to be a part of the game.

Radhika Apte, who appears in the later part of the trailer, plays Rizwan's love interest while Chitrangada Singh apparently plays Shakun Kothari's wife. The trailer is replete with dramatic punchlines and of course, you won't be able to take your eyes off Saif Ali Khan.

Watch the trailer of Baazaar here:

Speaking about his character in an earlier interview to news agency PTI, Saif Ali Khan said: "My character is like a nasty antagonist. Rohan Mehra is the hero. It is exciting to play strong and powerful roles. I don't distinguish between roles, it is funny. The idea is even if you play bad, if it is well-written, people don't think actors are being evil or nasty." Rohan Mehra is the son of late actor Vinod Mehra.

The film directed by Gauravv K Chawla is set to hit the screens on October 26.

(With inputs from PTI)
Promoted
Listen to the latest songs, only on JioSaavn.com