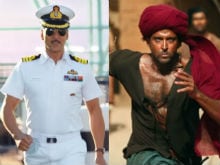 A still from Rustom and Mohenjo Daro

New Delhi: Movie-goers are in for a history lesson this weekend as two period films - Mohenjo Daro and Rustom - release today.

Akshay Kumar's Rustom is not situated far in history. The film is based on KM the Nanavati case where Indian Navy Commander Kawas Manekshaw Nanavati was tried for the murder of Prem Ahuja, his wife's lover. The case led to a landmark legal reform in Indian judiciary.

Rustom isn't one of its kind as there have been films based on the Nanavati case before. But it does have tremendous celebrity backing with stars like Salman Khan, Alia Bhatt, Ranveer Singh and other leading its celeb PR. Rustom directed by Tinu Suresh Desai also stars Ileana D'Cruz, Esha Gupta and Arjan Bajwa.

Mohenjo Daro starring Hrithik Roshan is based in the era of Indus Valley Civilisation and has been targeted for historical inaccuracies ever since the release of the film's first poster. Both director Ashutosh Gowariker and Hrithik have defended the film's accuracy saying it depends on which school of thought the viewer follows.

Hollywood films Cafe Society and Hell or High Water are also up for release. The former is directed by Woody Allen and stars Kirsten Stewart, Blake Lively and Jessi Eisenberg while the latter is helmed by Deavid Mackienzie and stars Chris Pine.

From the regional section Nayanthara and Daggubati Venkatesh's Selvi will hit the screens. Along with Selvi, films like Bommala Ramaram, Joker and Allama are also up for release.