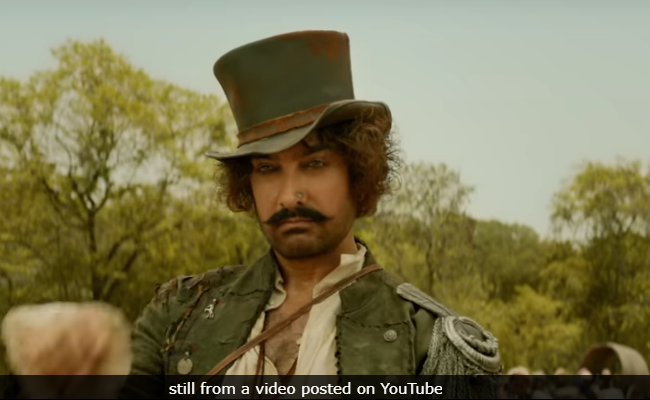 Aamir Khan in a still from the trailer of Thugs Of Hindostan. (Image courtesy: YouTube)

Thugs Of Hindostan, which is one of the most-awaited films of this year, will open in theaters today. The cast of the film is headlined by Amitabh Bachchan and Aamir Khan, who will be seen sharing screen space for the first time. The film also features Katrina Kaif and Dangal actress Fatima Sana Shaikh. Thugs Of Hindostan has been directed by Dhoom 3 director Vijay Krishna Acharya and it can be termed as a high-octane action film. Thugs Of Hindostan is set against the backdrop of 1795, in which Aamir Khan plays the role of a conman named Firangi while Amitabh Bachchan stars as the commander of sea named Khudabaksh (also called Azad). Katrina Kaif and Fatima Sana Shaikh will be seen playing the role of a dancer named Surraiya and a warrior named Zafira, respectively. The film also stars John Clive as the Commander of the East India Company.

Check out the trailer of Thugs Of Hindostan, which went insanely viral the day it was released and it has over 82 million views on YouTube.

The film has been produced by Aditya Chopra's Yash Raj Productions and it is one of the most expensive films to be made in the Indian cinema. In order to make the action sequences more authentic, two life-size ships were especially constructed for the film in Malta.

Thugs Of Hindostan is Aamir Khan's second collaborative project with Vijay Krishna Acharya. The duo have earlier worked together in Dhoom 3.