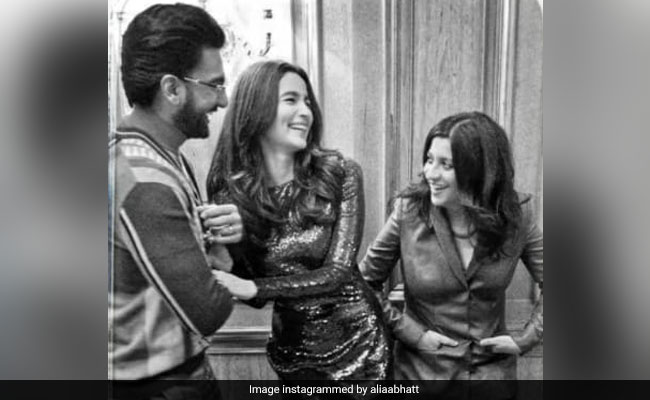 On Gully Boy director Zoya Akhtar's birthday, Alia Bhatt, who co-starred in the film with Ranveer Singh, shared a really special birthday wish for the "boss lady." Zoya Akhtar turned 48 on Wednesday. Posting a sweet birthday note for her "most favourite human ever," Alia Bhatt also shared a picture featuring herself, the director and Ranveer Singh. The trio can be seen having a hearty laugh in the photo. "Happy birthday boss lady!" wrote Alia on her Instagram story and added: "My most favourite human ever...love you." Gully Boy was critically acclaimed when it released in February last year. It was selected as India's official entry for the 92nd Academy Awards in the Best Foreign Language Film category. Back at home, the film swiped the top eleven awards at the Filmfare Awards, including the Best Actor, Best Director, Best Film, Best Actor In A Supporting Role, Best Dialogue and Best Screenplay, among others. 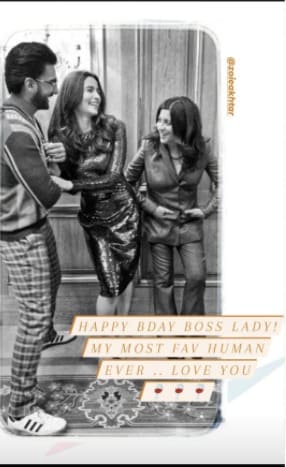 In Gully Boy, which is inspired by the life of rappers Divine and Naezy, Ranveer Singh plays the role of Murad, a man who rises from the slums of Dharavi to the centre stage of homegrown rap with the help of his mentor MC Sher (played by Siddhant Chaturvedi). Alia Bhatt plays the love interest of Ranveer Singh's character in the film. Gully Boy also stars Kalki Koechlin, Vijay Raaz and Vijay Varma.

In terms of work, Alia Bhatt was last seen in Sadak 2. The film, directed by her father Mahesh Bhatt and co-starring Sanjay Dutt and Aditya Roy Kapoor, tanked at the box office. She has several projects lined up, including Brahmastra with boyfriend Ranbir Kapoor, SS Rajamouli's RRR and Sanjay Leela Bhansali's Gangubai Kathiawadi.

Zoya Akhtar is known for directing hits like Zindagi Na Milegi Dobara and Dil Dhadakne Do. She has also directed short stories in anthologies such as Netflix's Ghost Stories and Lust Stories.