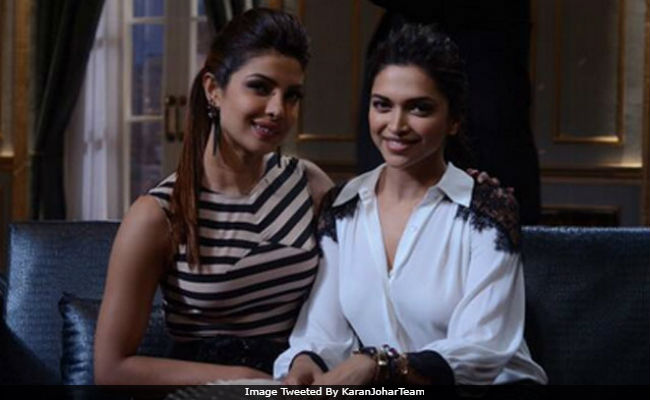 New Delhi: Actress Priyanka Chopra tweeted a shout-out to her colleague Deepika Padukone and cricketer Virat Kohli for making it to Time Magazine's prestigious 100 Most Influential People list. The list for 2018 was revealed yesterday and also features Ola co-founder Bhavish Aggarwal. Priyanka, who was on the annual Time 100 list two years ago, tweeted: "So happy and proud to see my friends Deepika Padukone and Virat Kohli on the #Time100 list. Big congratulations and so well deserved. #DesiPower #Represent." Priyanka also makes a cameo appearance in this year's list - she was invited by Time to write about actress and royal-to-be Meghan Markle. See the tweet Priyanka Chopra posted about Deepika Padukone and Virat Kohli:

So happy and proud to see my friends @deepikapadukone and @imVkohli on the #Time100 list.. Big congratulations and so well deserved #DesiPower#Represent

Priyanka Chopra also posted a throwback to her own Time 100 cover, with a congratulatory note for everyone who made this year's list and a special mention for Meghan Markle.

#TBT to my @Time 100 cover two years ago. Congratulations to everyone on this year's #Time100 list! Happy to have had the opportunity to share my thoughts about Meghan Markle, one of this year's honorees and my friend, with the world.

Deepika Padukone features in the Artists category of the Time 100 list of 2018. Her fellow honorees include Nicole Kidman, Hug Jackman, Gal Gadot, Sterling K Brown, Jimmy Kimmel, Guillermo Del Toro and Stranger Things star Millie Bobby Brown. "What an absolute honour," Deepika wrote on Instagram after the Time 100 list was announced yesterday. In a separate post, she thanked actor Vin Diesel - her xXx: The Return Of Xander Cage co-star - for authoring her write-up for Time. "Deepika is the best Earth has to offer. She's not just here to represent India; she's here to represent the world," he wrote. High praise.

what an absolute honour! #TIME100 @time

Promoted
Listen to the latest songs, only on JioSaavn.com
Virat Kohli, included under Titans with the likes of Roger Federer, Oprah Winfrey, Jeff Bezos and Elon Musk, has a bio written by Sachin Tendulkar. "The U-19 World Cup in 2008 was very important for India, as it would define the next bunch of youngsters who would go on to represent the nation. That was the first time I watched this young, passionate player lead India," it begins.