"It's just a matter of time...milenge, baaten karenge," wrote Sutapa 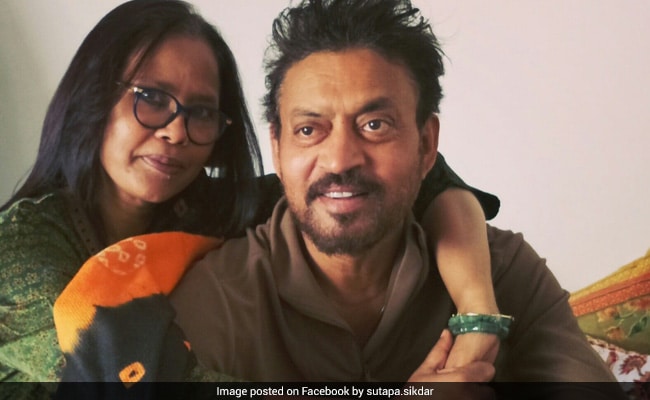 "It's just a matter of time...Till we meet again," wrote Sutapa Sikdar a month after her husband and actor Irrfan Khan's death. The Piku star died on April 29 in Mumbai's Kokilaben Dhirubhai Ambani Hospital. On Friday, Sutapa Sikdar shared two throwback photos of Irrfan Khan, one of which features her hugging the actor, on Facebook and wrote an emotional note for him. Quoting a verse from Sufi poet Rumi's poem A Great Wagon, Sutapa wrote: "Out beyond ideas of wrongdoing and right doing there is a field. I'll meet you there. When the soul lies down in that grass the world is too full to talk about." It's just a matter of time...milenge, baaten karenge... Till we meet again."

In one of the pictures, Irrfan can be seen lying down on grass and looking at the camera while the other one shows the actor taking a selfie with Sutapa holding him from the back.

Earlier this month, Sutapa shared the link of a song that Irrfan Khan "loved" and used to listen to whenever he was sad. "My eternal love to him and gratitude to the universe and prayers for everyone in these extraordinary times while I pray for him... The song he loved and listened when sad and it soothes me now in the most difficult times... my eyes can't see you but you remain in my vision," she wrote while sharing the song.

Irrfan Khan battled cancer for over two years and because of his health condition, he stayed away from spotlight for a long time. On April 29, he lost his battle with a rare form of cancer and died at the age of 53 in the Kokilaben Dhirubhai Ambani Hospital. He is survived by Sutapa and their two sons - Babil and Ayaan.

Irrfan Khan, who worked in several critically acclaimed films such as Paan Singh Tomar, The Namesake, Maqbool, Haasil, Haider, Piku and Talvar among others, was last seen in Angrezi Medium, which is a sequel to his 2017 hit Hindi Medium.