Tiger Shroff's First Look From Baaghi 2 Is High On Heropanti 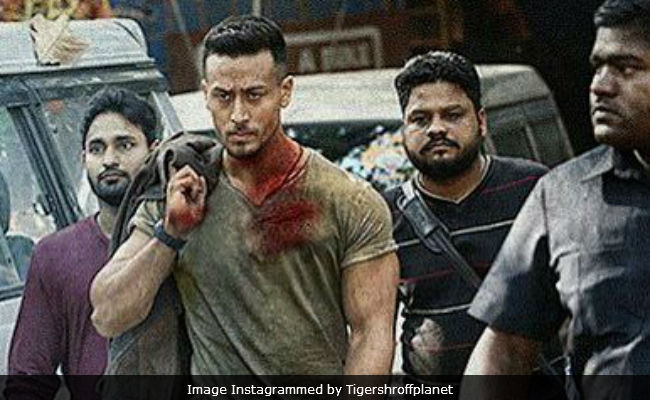 Tiger Shroff on the sets of Baaghi 2. (Image courtesy: tigershroffplanet)

New Delhi: Thank God it's Friday because Tiger Shroff revealed his first look from his upcoming film Baaghi 2. Tiger elated his fans with the first look from the film, which is super intense and fierce. A fan club on Instagram posted Tiger Shroff's picture, which seems to be from the sets of Baaghi 2. Tiger seems to be all set with his deadly and rugged looks with blood smeared on his tee. The picture was captured when Tiger was walking from his vanity van to the set location to shoot an intense action sequence. Compliments like 'killer,' 'fabulous' and 'dhasu' are posted in plenty while some Instagram users can't wait to watch Tiger in his upcoming film.

@tigerjackieshroff's FIRST LOOK FROM #BAAGHI2 REVEALED: #MumbaiMirror recently got a glimpse of @tigerjackieshroff's look as he was walking from his vanity van to the set to shoot an intense maar dhaad sequence. He was almost unrecognisable with his bulging biceps and military cut, his chin darkened by a stubble, the shadow of a moustache over his lips and his tee stained with blood. A source from the set informed that action choreographers from around the world have been flown down to design the stunts. @dishapatani @khan_ahmedasas @teamtigershroff @nadiadwalagrandson #ahmedkhan #dishapatani #sajidnadiadwala #tigershroff #dishapatani #baaghi2 #randeephooda #bollywood #action

Baaghi 2, which is a sequel to Tiger's 2016 film Baaghi, went on floors earlier in September. The film marks Tiger's third collaboration with Sajid Nadiadwala. The duo have earlier worked together in Heropanti (Tiger's debut film) and Baaghi. Baaghi 2 also features Tiger's rumoured girlfriend actress Disha Patani in the lead role. Tiger and Disha will share the screen space for the first time though they have previously featured in a music video Befikra.

Earlier, Tiger posted a poolside picture with Disha, revealing that they had wrapped the shooting for Baaghi 2, in Pune.

Of casting Disha in the film, producer Sajid Nadiadwala earlier said, "When we did the look test of both of them together, we were convinced with their chemistry and about Disha being the perfect choice for the role."

2016's action drama Baaghi starred Shraddha Kapoor and was directed by Sabbir Khan while the sequel will be directed by Ahmed Khan.

Promoted
Listen to the latest songs, only on JioSaavn.com
Disha Patani is best known for her roles in MS Dhoni: The Untold Story and Kung Fu Yoga while Tiger has a well-established fan following courtesy films such as Heropanti, Baaghi and Munna Michael.

After Baaghi 2, Tiger Shroff will be busy filming the Indian adaptation of Sylvester Stallone's Rambo. He has also signed up for Siddharth Anand's next film, which co-stars Hrithik Roshan and it will be produced by Yash Raj Films.