Tiger Shroff Is On His Way To Work And This Song Is On His Mind. See Post 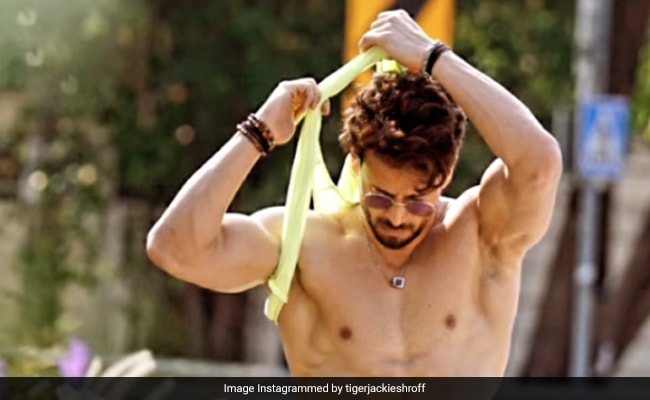 Tiger Shroff's daring stunts and onscreen performance have left us in awe. And, we also love the way he sets fire on the stage with his dance moves. Now, there's one more talent added to that list. The actor can make us groove with his singing too. Tiger's first single Poori Gal Baat is winning the hearts of several fans. Seems like the actor himself can't get over the lines from the song. That's what he stated in his latest Instagram post. He wrote, "On my way to work singing some of my fav lines from Poori Gal Baat."

Tiger Shroff also attached a video to the post. And, we are swooning. Why? In the video, we see Tiger confidently taking off her shirt while walking on the streets. Meanwhile, lines from his song play in the background.

On Tiger Shroff's birthday, he treated us to another amazing video of his. We see the actor perfectly nail a somersault. That's not all. He takes it further and merges the stunt with a few striking dance steps. For the dance, Tiger grooved to Poori Gal Baat. He left the post as a "challenge" for his fans to take up. He named his upcoming action film and captioned the post, "Here's my Heropanti 2 style Poori Gal Baat challenge. Show me what you guys got."

Here's another video where we see Tiger Shroff nailing an array of somersaults without a break. The actor is shirtless in a desert under the scorching sun. But nothing can dim his indomitable spirit. The caption read, "Your love got me feeling" along with thunderbolt and typhoon emojis. He mentioned his recently released song in the hashtag.

Looks like singing the Punjabi/English single Poori Gal Baat was one of the most challenging things Tiger Shroff has done. Recently, he shared a clip from his music video and wrote, "One of the most challenging things I've ever done. My first Punjabi single. Tell me what you guys think." The actor's rumoured girlfriend Disha Patani commented, "Punjabi. Too good." Tiger Shroff's sister Krishna Shroff wrote, "Yet you nail it every damn time."