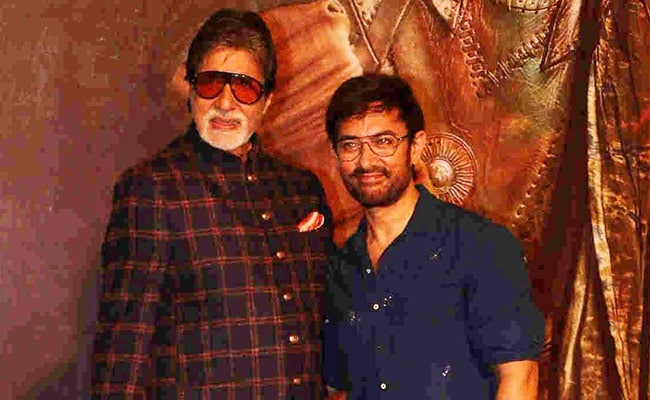 Aamir Khan, who is all set to share screen space with megastar Amitabh Bachchan in Thugs Of Hindostan for the first time, revealed that they were to star in director Indra Kumar's film Rishta previously but due to "several reasons" the project never took off, the actor told news agency PTI. "We had a film together that Indra Kumar was going to make called Rishta, it was announced very long back. But due to several reasons it could not be made," PTI quoted the actor as saying. The 53-year-old actor, who was speaking at the trailer launch event of his upcoming film Thugs Of Hindostan, said that since then he has been "waiting for an opportunity" to work with Big B. "Since then I was waiting to get an opportunity to work with him in a film. I am glad it happened now. I don't have the guts to say 'no' to a film with Amit ji," Aamir Khan told PTI.

When Aamir Khan started rehearsing with Amitabh Bachchan, he revealed, it was a "fan moment" for him. "He was in front of me, we were rehearsing, and it was really a fan moment for me. I really couldn't speak properly or remember my lines. I was a little spaced out. And I must tell you, it was joyous for me to shoot with him. Every moment with him was a fan world moment for me," Aamir told IANS.

The trailer of Vijay Krishna Acharya's film Thugs Of Hindostan was unveiled on Thursday. Aamir Khan plays the role of a conman named Firangi Mullah while Amitabh Bachchan plays Khudabaksh, the feisty commander of the sea. The film also starring Katrina Kaif and Sana Fatima Shaikh is set in 1795 when the East India Company had begun to rule India.