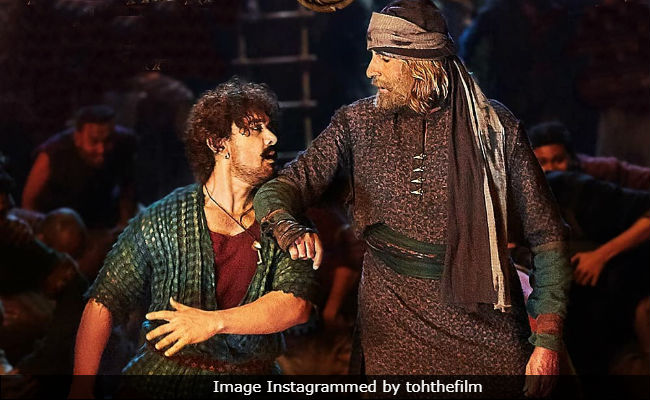 A still from Thugs Of Hindostan (courtesy tohthefilm)

While the Thugs Of Hindostan has 100 crore reasons to smile today, the recent collections raked in by the film has been described by trade analyst Taran Adarsh as "the downfall." Vijay Krishna Acharya's ambitious film Thugs Of Hindostan, starring two Bollywood biggies Amitabh Bachchan and Aamir Khan, opened to middling reviews on Thursday but with a record-shattering box office business of over Rs 50 crore. However, Friday onwards, the film's numbers at the ticket windows began to dip. On Saturday, Thugs Of Hindostan raked in a lesser amount than on Friday with Rs 22 crore pushing the total to Rs 105 crore (including Tamil and Telugu versions).

In his assessment report, Taran Adarsh said Thugs Of Hindostan's dipping figures suggest that the film will struggle to keep up a good pace over the week: "The downfallL continues... Thugs Of Hindostan gets weaker with each passing day... With biz declining further on Day 3 [Sat], the writing is clear on the wall... Will find it tough to sustain from Day 5 [Mon] onwards," he tweeted. Thugs Of Hindostan made Rs 28.25 crore on Friday and Rs 22.75 crore on Saturday.

The DOWNFALL continues... #ThugsOfHindostan gets weaker with each passing day... With biz declining further on Day 3 [Sat], the writing is clear on the wall... Will find it tough to sustain from Day 5 [Mon] onwards... #TOH

On Saturday, Mr Adarsh tweeted to say that: "And the decline begins... Thugs Of Hindostan slips on Day 2, facing a fall during Diwali holidays... Mass belt / single screens are holding better, but the cracks are already showing at plexes."

#ThugsOfHindostan has to show a positive upturn on Day 3 [today], else its sustainability from Day 5 [Mon] onwards will be extremely doubtful... One thing is crystal clear: #TOH has NOT met the monumental expectations... The BO numbers are doing the talking now.

The film may be witnessing a downward graph at the box office but it tops the list of 2018's films with highest opening day collections. Thugs Of Hindostan plonked itself on the top spot with Sanju, Race 3, Gold and Baaghi 2 in the list below.

In his review for NDTV, Saibal Chatterjee summed up the essence of Thugs Of Hindostan and said: "It might entertain large swathes of the audience, but it is ultimately too tacky and unconvincing to lay legitimate claims to being India's answer to Pirates of the Caribbean. It isn't even a poor copy." Thugs Of Hindostan also stars Katrina Kaif and Fatima Sana Shaikh.