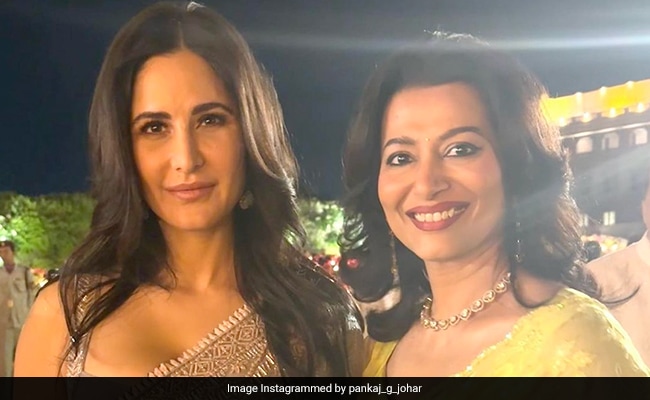 Katrina Kaif recently attended a wedding in Jodhpur, Rajasthan, and a picture of her from the ceremony is going viral on the Internet. In the viral image, Katrina is happily posing with fashion designer Pankaj Johar in a grey saree with golden detailing. The actress kept her hair loose and sported statement earrings and a bangle. Sharing the post, Pankaj Johar wrote, "Glimpses of unforgettable and mesmerising wedding of #anchit at #jodhpur..." Soon after she shared the post, Katrina's fans flooded the comment section with heart, fire and love-struck emoticons.

The actress also happily posed with her little fan at a wedding. Check out the post below:

Another stunning pic of #katrinakaif 🤌❤️
From the wedding pic.twitter.com/ormLV1UdwP

A while ago, Katrina Kaif offered a closer look at her saree on her Instagram handle. In the images, the actress looks stunning as she poses for the camera in a saree. Sharing the post, she wrote, "Aaj ka din. (Today's day)." Check out the post below:

Earlier that day, Katrina Kaif was pictured arriving at Jodhpur airport in an all-pink suit set. She completed her look with sunglasses and a black mask. Check out the viral video below:

She is so cute 🥺#KatrinaKaifpic.twitter.com/GNLG9UZIcr

On the work front, Katrina Kaif was last seen in Phone Bhoot with Siddhant Chaturvedi and Ishaan Khatter. Next, she will be seen in Merry Christmas with Vijay Sethupathi and Tiger 3 with Salman Khan. Both films are scheduled to release next year in the theatres. Also, the actress has Farhan Akhtar's Jee Le Zaraa with Alia Bhatt and Priyanka Chopra. However, the makers are yet to announce the release date of the film.

Meanwhile, Katrina Kaif and Vicky Kaushal are all set to mark their first wedding anniversary next month (December 9). The couple got married last year in an intimate yet lavish wedding in Rajasthan after dating for a while.