Anil Kapoor's dance moves will drive away your mid-week blues 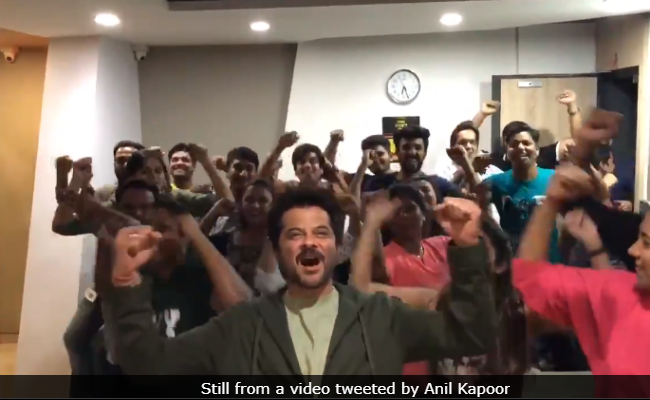 Anil Kapoor in a still from the video. (Image courtesy: AnilKapoor)

It is a well-known fact that Ram Lakhan is one of the most successful films of Anil Kapoor's career and it resonates with today's generation courtesy its iconic song My Name Is Lakhan and the latest video shared by Anil Kapoor reminds us of just that. On Wednesday, the 61-year-old actor shared a video on his Twitter account, in which he can be seen doing the signature step of the song My Name Is Lakhan along with his fans. The actor captioned the video: "Surprise surprise! Thank you guys for this. Love you all." He accompanied the post along with the hashtag "#HappyLakhan." He later shared the same video on his Instagram story as well.

Surprise surprise!
Thank you guys for this!
Love you all!
#happyLakhanpic.twitter.com/9eVOGaJNxk

In Ram Lakhan, Anil Kapoor played the role of Lakhan, Ram's wayward brother, who falls into the enemy's trap and Jackie Shroff played the role of a righteous cop named Ram. Ram Lakhan was one of the most successful films directed by Subhah Ghai. The film also starred Madhuri Dixit.

In 2014, filmmakers Rohit Shetty and Karan Johar had announced that they will collaborate to make the remake of the 1989 hit film. However, there has been no progress on the project as of now.

On the work front, Anil Kapoor was last seen in Fanney Khan, co-starring Aishwarya Rai Bachchan and Rajkummar Rao. He will next be seen in Total Dhamaal, co-starring Madhuri Dixit, Riteish Deshmukh, Arshad Warsi and Javed Jaffrey. He also has Ek Ladki Ko Dekha Toh Aisa Laga in the pipeline, in which he will be seen sharing screen space with his daughter Sonam Kapoor. He will also be seen in Karan Johar's Takht.