We would love to see Kiara Advani's reaction 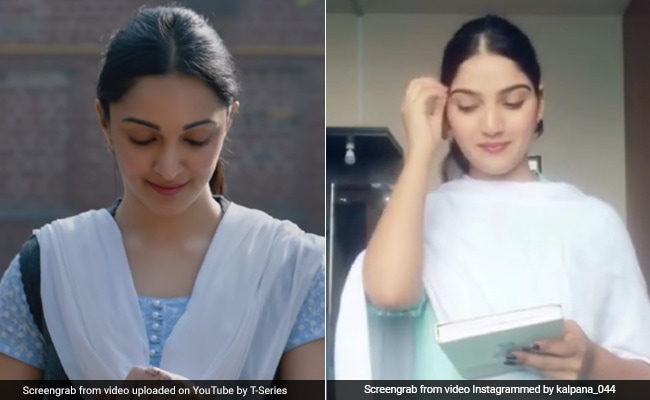 The Internet just chanced upon Kiara Advani's doppelganger and the actress' fans clearly can't keep calm. A TikTok user named Kalpana Sharma has been actively recreating scenes from Kiara Advani and Shahid Kapoor's 2019 film Kabir Singh. Dressed as Kiara's character Preeti, Kalapana shared videos on her TikTok as well as Instagram profile and the Internet couldn't help but notice that she has a striking resemblance to the Guilty actress. Comments like "You resemble Kiara a lot," "looks so similar to Kiara man" and "how can you look this similar" were seen on the post. Another Instagram user wrote,"Kiara or Kalpana?" Another comment read, "You look exactly like Kiara."

We would love to see Kiara Advani's reaction. Check out some of the posts here:

Kabir Singh, starring Shahid Kapoor and Kiara Advani in the lead roles, showcases the story of Dr Kabir Singh , who is a drug addict, an alcoholic and an obsessive lover. He happens to be stubborn and self-destructive and his love for Preeti knows no boundaries. The film released to tremendous box office numbers.

On the work front, Kiara Advani awaits the release of Netflix's Guilty. She was last seen in Good News, alongside Kareena Kapoor, Akshay Kumra and Diljit Dosanjh. Kiara has several projects in her kitty, which include Laxmmi Bomb with Akshay Kumar, Bhool Bhulaiyaa 2, opposite Kartik Aaryan and Indoo Ki Jawani.

Kiara Advani made her Bollywood debut with the 2014 film Fugly. However, her breakout film was 2016's MS Dhoni: The Untold Story. She has also starred in films like Bharat Ane Nenu, Vinaya Vidheya Rama and Machine, to name a few.