This Throwback Pic Of Shraddha Kapoor Is Too Cute To Miss 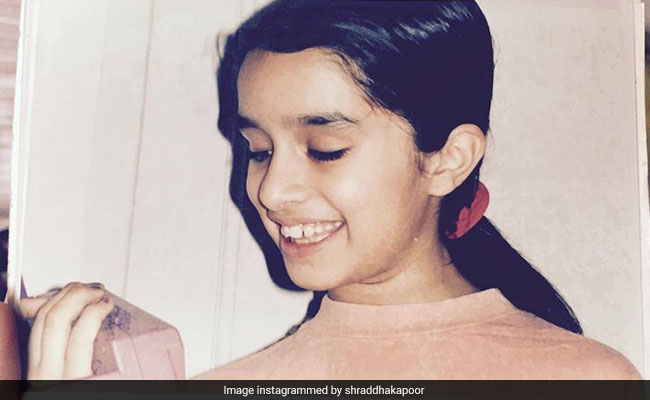 Shraddha Kapoor flipped through the pages of her childhood diaries and treated her fans to a throwback photo of herself on Monday. The actress, who every now and then shares old pictures of herself, picked a photo from the time she had teeth like a rabbit (her words not ours). It wouldn't be wrong to say that Shraddha looks beyond adorable in the photograph. She can be seen holding a box in her hand and looking at it with a million-dollar smile on her face. Sharing the picture, Shraddha Kapoor wrote: "Jab mere khargosh jaise daant the. #BeforeBraces." Check out her throwback photo here:

Like we said above, Shraddha Kapoor's pitara full of throwback pictures always makes our day. In March, she posted this really cute photo of herself from her childhood and stole our heart. Take a look:

Before that, on the occasion of Gudi Padwa, the actress shared a picture collage featuring herself, mother Shivangi Kolhapure and grandmother Anupama Kolhapure - all three decked in sarees and traditional Marathi ornaments. Check it out:

On the work front, Shraddha Kapoor has featured in a number of films like Half Girlfriend, ABCD 2, Ok Jaanu, Stree and many more. She was last seen in the 2020 action-thriller Baaghi 3, in which she shared screen space with Tiger Shroff and Riteish Deshmukh. Directed by Ahmed Khan and produced by Nadiadwala Grandson Entertainment and Fox Star Studios, the film hit the screens on March 6. Shraddha Kapoor will next be seen in a Luv Ranjan film opposite Ranbir Kapoor.