This Throwback Pic Of Rishi Kapoor, Subhash Ghai And Simi Garewal, From The Sets Of Karz, Is 'Still As Fresh As Yesterday'

"Thank you Rishi Kapoor for sending me this nostalgic picture," wrote Subhash Ghai 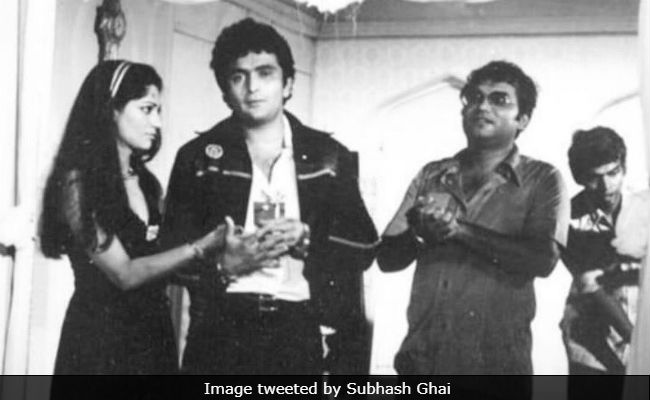 On Wednesday night filmmaker Subhash Ghai shared an epic throwback picture on his Twitter account, which happens to be about four decades old. Yes! You read that right. The 73-year-old filmmaker treated his fans to a grey scale throwback picture, which was taken on the sets of the 1980 film Karz. BTW, did we tell you that besides Subhash Ghai, the picture also features Rishi Kapoor and actress Simi Garewal, who played the lead roles in the blockbuster? Mr Ghai tweeted the picture along with the caption: "Thank you Rishi Kapoor for sending me this nostalgic picture of Karz, on set with three of us in action." In his post, Mr Ghai made an interesting revelation. He revealed that it was on this very day (October 24, 1978) that the film was launched." He added, "How Karz which was launched on 24th October 1978 and is still as fresh as yesterday on its 40th year. Blessed we are."

Bring back the Eighties' nostalgia with this picture:

Thank u @chintskaprishi kapoor for sending me this nostalgic
pic of #Karz on set with three of us in action
how #KARZ which was launched on 24th October 1978 and is Still as fresh as yesterday on its 40th year @MuktaArtsLtdtoday 24oct 2018.
Blessed we are pic.twitter.com/aLcDIEwU5n

In Karz, Rishi Kapoor played the role of a rock star named Monty, who was the re-incarnation of a man named Ravi Verma (played by Raj Kiran), while Simi Garewal portrayed the role of a murderous wife named Kaamini Verma.

Besides Rishi Kapoor and Simi Grewal, Karz also featured Tina Munim, Pran and Premanath in pivotal roles. Karz emerged as the ninth highest grossing film of that year and it was one of the most successful films directed by Subhah Ghai.

The film also fetched Laxmikant-Pyarelal a Filmfare Award for the Best Music Director. The film resonates with today's generation through its iconic songs such as Om Shanti Om, Ek Haseena Thi, Paisa Yeh Paisa and Dard-E-Dil among others.