This Pic Of Jeetendra And Laksshya Kapoor Will Make You Smile 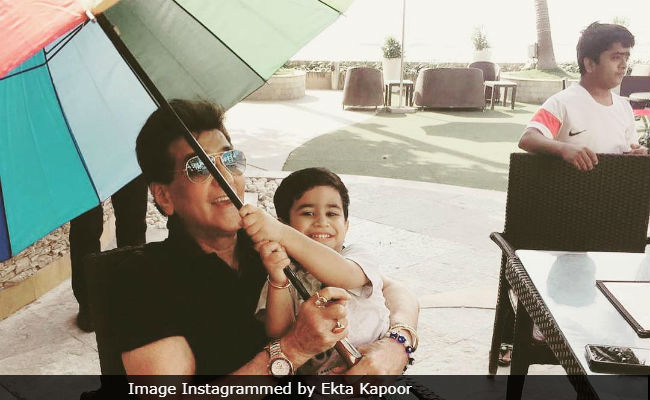 Ekta Kapoor's latest Instagram post will instantly bring a big smile to your face. Why, you ask? Well, let's just say that the picture features two of our favourite members from the Kapoor family. In case you still haven't figured out what we are talking about, we are referring to Ekta Kapoor's latest Instagram post, featuring her father and veteran actor Jeetendra and her nephew Laksshya. In the oh-so-adorable picture, little Laksshya can be seen happily holding an umbrella for Jeetendra as he sits curled up in his grandfather's lap. The duo can be seen smiling and the picture and we must tell you that they look absolutely adorable. Ekta Kapoor accompanied the post along with three heart emoticons. The comments section was replete with comments like "so cute" and "adorable." Another Instagram user wrote: "This dada-pota jodi rocks."

Ekta Kapoor, who became a mother via surrogacy, a few weeks ago, shared a picture of Laksshya standing by the baby cot of her son Ravie and captioned it: "Big brother is watching."

Laksshya frequently features on his aunt Ekta Kapoor's Instagram profile and we simply love it when that happens. Remember the video that Ekta Kapoor shared on her Instagram profile, in which the little munchkin could be seen singing Lata Mangeshkar and Kishore Kumar's song Phoolon Ka Taron Ka from the 1971 film Hare Rama Hare Krishna?