New Mom Ekta Kapoor To 'Boss' Shobha Kapoor On Her 70th Birthday: 'Gave The Best Gift To You'

Ekta Kapoor became a mother to a son on January 27 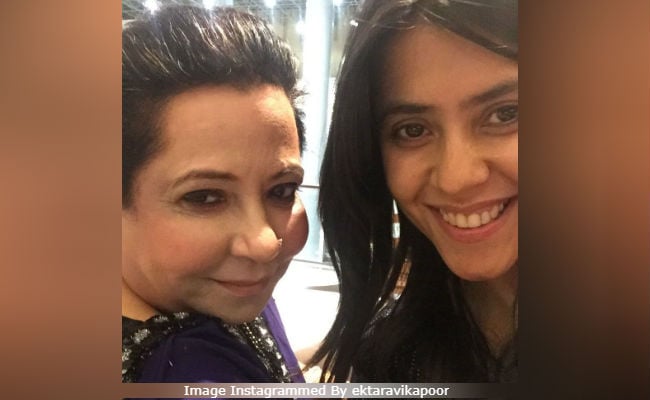 TV Czarina Ekta Kapoor, who became a mother to a son named Ravie on January 27, has the sweetest birthday wish for her mother Shobha Kapoor, who turned 70 today. "Happy birthday to my boss! You cannot deny that on your 70th, I've given the best birthday gift to you. And, I cannot deny that now I'm ruled by two Aquarians," read Ekta's message for Shobha Kapoor. Ekta's son Ravie was born via surrogacy. The proud mom made an official announcement about her son's birth on Thursday. He has been named after Ekta's father Jeetendra, whose real name is Ravi Kapoor.

Her younger brother Tusshar Kapoor wished Shobha Kapoor with a picture of hers with Ekta, Jeetendra and his son two-year-old son Laksshya, who was also born via surrogacy. "Happy birthday, daadi. Keep smiling forever! May all your wishes come true," Tusshar captioned the post on behalf of Laksshya.

Of becoming a grandfather for the second time, Jeetendra told Zoom TV: "As a father, I can't remember when I played with my children. I was so busy in struggling that I couldn't contemplate when my children grew up. I'm living that with my grandsons."

"I've become a grandfather very late in my life but this is such a divine pleasure, I can't get over it. I'm so thankful to Tusshar and Ekta, thankful to my family. This gift is the greatest gift in my life," he added.

Ekta Kapoor announced Ravie's birth on social media with a heartfelt post and said "she feels immensely blessed to become a parent."

Ekta Kapoor is a successful TV and film producer. She has produced some of the top-rated shows on TV including Kyunki... Saas Bhi Kabhi Bahu Thi, Kahaani Ghar Ghar Kiiand the Kasautii Zindagii Kay and Naagin series.