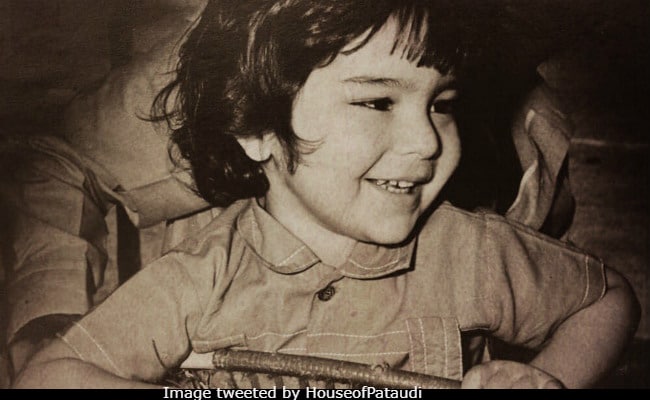 Thank god, it's Thursday! This photo of baby Saif Ali Khan is a true blue blast from the past. On Thursday, we chanced upon a photo of the nawab, from when he was a baby, on the Twitter feed of House of Pataudi, which is the ethnic wear label co-owned by Saif Ali Khan. One would have taken a while to guess who actually features in the throwback photo had it not been for the caption, which identifies him as Saif Ali Khan. "Doesn't Saif look adorable in this throwback," read the caption and we completely agree. In the sepia toned photo, baby Saif can be seen adorably smiling as something appears to have bemused him.

Here's the treasured photo of baby Saif Ali Khan that will drive away your mid-week blues:

Meanwhile on Wednesday, we were also delighted to have spotted a priceless piece of throwback gold on Karisma Kapoor's Instagram timeline, also featuring sister Kareena. "Always twinning, since forever," read Karisma's caption for the photo, in which the Kapoor sisters can be seen sporting similar hairstyles.

Saif Ali Khan and Kareena Kapoor married in October 2012 and the couple welcomed their first child - baby Taimur - in December 2016.

Taimur Ali Khan, who will celebrate his second birthday this December, is an absolute favourite of the paparazzi. The little nawab recently trended a great deal for a viral video in which he can be heard correcting the paparazzi as they called out his name. "It's Tim!" Taimur says in the video.