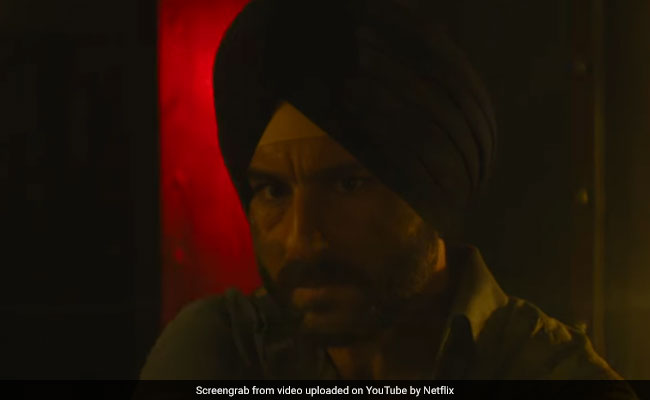 Saif Ali Khan, who plays the role of Sartaj Singh, a Sikh cop, in Netflix web-series Sacred Games, revealed in an interview to news agency PTI how he convinced himself to play the character. Initially, Saif Ali Khan said, he wasn't very "confident" about his role in the series but later he realized that the character of Sartaj is "fascinating". "I said to myself that 'just be confident'. Sartaj is a fascinating character. He's holding the show forward. Technically, the show is not moving forward without him. He is the soul and grounds it. And then, you need something to believe in otherwise everyone can be immoral," Saif Ali Khan told PTI.

Initially, Saif Ali Khan reveals, he was "irritated" with what unfolded. "I felt like he's getting slapped by everybody. What's happening? Some second rate thug Bunty is jhaaping him. I got irritated. But it takes time. And if you see the show and I saw it much later. I asked him, 'Are you sure you want me to do this role because this other guy has such a fun colour?' and I was told that those things are true but we have seen that before," Saif said.

Instead of playing a regular gun-totting cop, Said Ali Khan's role in the series was quite willing to "get slapped" and that made the "difference". "He could have easily been this gun-toting cop but he's not. He's screwed on every level in his personal life. He's trying to commit suicide, maybe by drinking the drain cleaner. Everyone is hitting and punching him, he's so down. Perhaps that's what made us feel that he's different. I think the fact that I did it and did it quite willing to get slapped made a difference."

Meanwhile, Saif Ali Khan is gearing for the release of Baazaar where he plays the role of an influential businessman Shakun Kothari. The film also features Vinod Mehra's son Rohan Mehra, who is making his Bollywood debut with this film. Speaking about his character in the film Saif said: "My character is like a nasty antagonist. Rohan Mehra is the hero. It is exciting to play strong and powerful roles. I don't distinguish between roles, it is funny. The idea is even if you play bad, if it is well-written, people don't think actors are being evil or nasty."

Saif Ali Khan also has Jawani Janeman and Hunter in the line-up. Saif is also part of the second season of Sacred Games, which was announced in September.