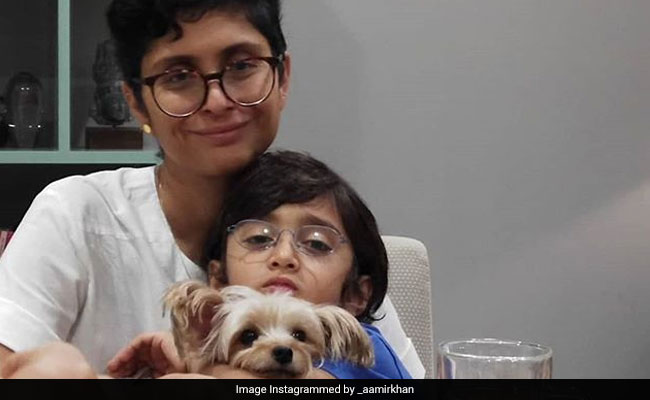 Aamir Khan just shared the most adorable photo of little Azad with his mother Kiran Rao. The photo shared by the 53-year-old actor perfectly sums up our Sunday mood. The photo features Kiran Rao with her cute little son Azad and his friend Imli. Aamir captioned the photo: "Lazy Sunday." It appears that the photo has been taken on the breakfast table, where Azad is seated on his mother's lap holding the little pup in his arms. Kiran Rao is all smiles for the photographer (which appears to be Aamir) while Azad looks a little grumpy. Within few hours, the photo has over one lakh likes. The comments section is flooded with remarks like : "Chota Aamir Khan," "Cuteness overloaded," and "Aamir Sir, he is your copy."

Aamir Khan married Kiran Rao in 2005 and their son Azad Rao Khan was born in 2011. Aamir was earlier married to Reena Dutta and the couple later divorced in 2002. Reena and Aamir are parents to daughter Ira and son Junaid.

Kiran Rao, who had directed her first and only project Dhobi Ghat seven years ago, in an earlier interview to IANS revealed that she is working on her next project. The Dhobi Ghat director said that she has been excusing herself from directing films for a while considering Azad's age but now she is gearing up for her next project. "I know it has been quite some time that I have not made a film and kept giving excuses that my baby is small, but I think this is high time that I have to put it (a film) out there," IANS quoted Kiran as saying.