"Don't look at his cro*ch. I meant his feet," Twinkle Khanna told KJo in the video 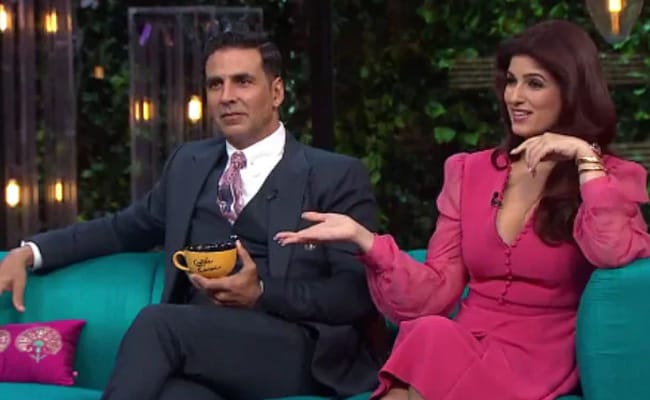 Twinkle Khanna and Akshay Kumar in Koffee With Karan.

Twinkle Khanna never fails to crack up her Instafam with quirky videos and pictures. On Friday, Twinkle's "dear friend" Karan Johar shared a fan-edited video featuring himself, Twinkle and Akshay from season 5 of Koffee With Karan with Twinkle and she can't stop laughing at it. The old clip is from Koffee With Karan's season 5's second episode where KJo was seen asking rapid-fire questions to Twinkle and Akshay. In the video, KJo can be seen asking Twinkle, "What does Akshay have that Khans don't," to which Twinkle promptly answers, "Some extra inches." KJo, totally flabbergasted, can be seen looking at Akshay, to which Twinkle hilariously replies saying, "Don't look at his cro*ch. I meant his feet. You always had your mind in other people's cro*ches." The hilarious fan-edited video left Twinkle's Instafam cracked up. In another segment, KJo can be seen asking Twinkle, "Who's the coolest Khan," to which Twinkle can be seen telling KJo, "Why don't you add Fawad and then you answer this question. Aamir, Salman, Shah Rukh, Fawad - who's your favourite," to which KJo can be seen laughing. Sharing the hilarious clip, TwinKle wrote, "My dear friend Karan Johar sent me this one and we both cracked up. How did we get away with all this nonsense." She also added "old is gold" to her post. Take a look:

My dear friend @karanjohar sent me this one and we both cracked up. How did we get away with all this nonsense #OldIsGold

Within minutes of posting, Twinkle's video was flooded with comments from her friends and fans. Reacting to the video, Tahira Kashyap commented, "Dayum! You both should do a live," while Karan Johar wrote, "I can't believe this."

Koffee With Karan, first aired in 2004, is hosted by Karan Johar. It is a talk-show where KJo engages in casual conversations with celebrities and tries to scoop secrets from them. Twinkle Khanna made her first appearance in the show with Akshay in the fifth season. The episode was aired in 2016.

Twinkle Khanna always has her sense of humour on point. The 46-year-old author, a few days ago, shared a ROFL video featuring her monologue for mother's day. In the video, Twinkle said, what she really wants for mother's day is a day off from responsibilities, to not be asked where is the blue t-shirt, if her kids can go to visit their friends and when the coronavirus lockdown is going to end. The monologue, shared by Twinkle on her social media profiles, also featured how she wants her kids to call her "aunty" on mother's day and not "mummy." Take a look:

On the work front, Twinkle Khanna sports many hats - she is the best-selling author of Mrs Funnybones and Pyjamas Are Forgiving, a columnist, an interior designer and also a producer. On the other hand, Akshay Kumar was last seen in Good Newwz. He has films such as Laxmmi Bomb, Prithviraj, Sooryavanshi and Atrangi Re to look forward to.