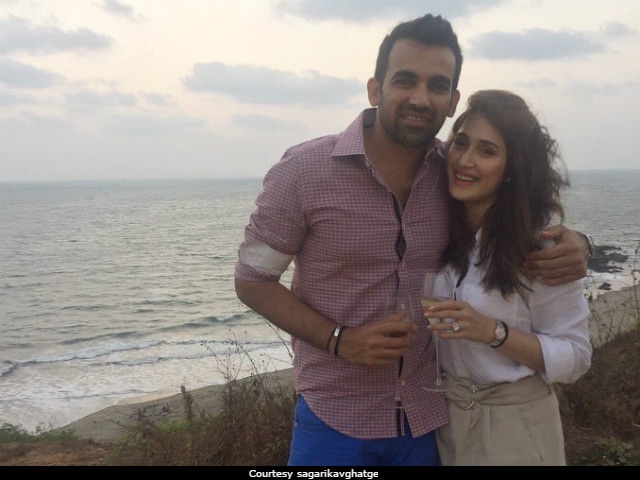 New Delhi: Newly-engaged actress Sagarika Ghatge said that her cricketer fiance Zaheer Khan successfully managed to surprise her, when he popped the special question with a ring, reported Times Of India. Zaheer had meticulously planned the engagement but Sagarika was absolutely oblivious of the arrangements, she revealed in an interview to Times Of India. "Zak secretly planned our engagement for days; and I honestly had no clue. I had no idea that he had picked up such a pretty ring for me. I can't describe that moment and it will forever remain as something very special between us. We are really blessed," Times Of India quoted Sagarika as saying. Celebrity couple Zaheer Khan and Sagarika Ghatge announced their engagement with cute social media posts on Monday evening.

Now, fans and followers are eager to know the wedding details of the much-in-love couple. When asked about their impending wedding, the Chak De! India actress told Times Of India: "We will discuss all this once the IPL is over. Right now Zak has to practice and once the league is over, we will all sit down and plan the dates and the ceremonies." Zaheer Khan is the captain of IPL team Delhi Daredevils and the Indian Premiere League is supposed to wrap on May 22.

In her interview to Times Of India, Sagarika also points out that what brings them closer is the principles and values they share. While both Sagarika and Zaheer are from Maharashtra, the actress also reveals that Zaheer is more a "Marathi at heart" than she is, reported Times Of India.

Promoted
Listen to the latest songs, only on JioSaavn.com
While we look forward to their grand wedding, here's a look at how Sagarika and Zaheer announced they are engaged: