This Greek Fan Danced To Madhuri Dixit's Ek Do Teen In Quarantine. The Actress' Reaction

"Let's make the most of this time, stay safe and stay home," tweeted Madhuri Dixit 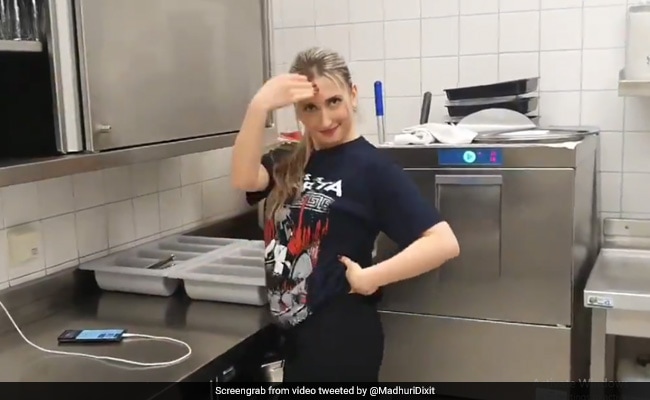 A still from a video shared by Madhuri Dixit. (Image courtesy: MadhuriDixit)

In the wake of the coronavirus pandemic, lockdowns have been imposed in several countries, but that hasn't stopped people from having their fair share of fun and Madhuri Dixit's latest tweet is an example of that. The 52-year-old actress shared a video of her fan from Greece, who could be seen dancing her heart out on Madhuri's popular song Ek Do Teen from her 1988 film Tezaab. Sharing the video on Twitter, Madhuri wrote: "Loved this video... There are so many things that we can do at home. Spend time with our loved ones, learn and discover new things, workout, dance, sing and do whatever you never got to do because of your busy schedule. Let's make the most of this time, stay safe and stay home."

The Twitter user, who originally shared the video, wrote: "While the world is in stress because of coronavirus, my colleague Katerina Korosidou is enjoying dancing at work to get away from Corona stress. Katerina is from Greece and a huge fan of famous Indian actress Madhuri Dixit."

Loved this video... There are soo many things that we can do at home, spend time with our loved ones, learn & discover new things, workout, dance, sing & do whatever you never got to do because of your busy schedule. Let's make the most of this time, stay safe & stay home! https://t.co/4LJMEVyKqx

The World Health Organisation or WHO has classed the Coronavirus outbreak, which originated in Wuhan, China, as a pandemic. India has reported over 150 confirmed cases and announced stringent measures such as suspension of visas.

On the work front, Madhuri Dixit will soon be making her debut in the digital world with Netflix's upcoming series, which will be produced by Karan Johar. The actress has previously collaborated with Netflix for a Marathi drama titled 15th August, which was her debut project as a producer.