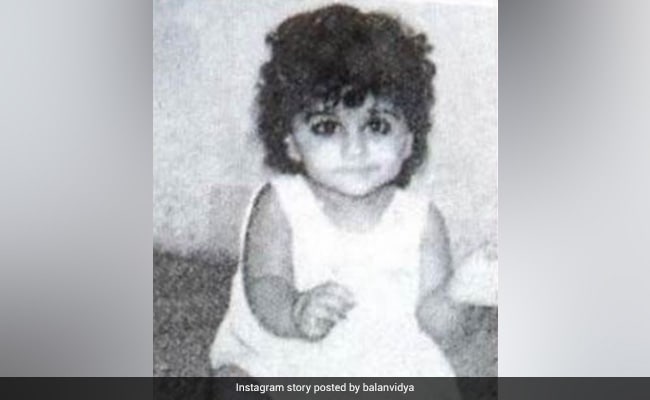 The actress shared this photo on Instagram. (Image courtesy: balanvidya )

Our Tuesday couldn't get any better as we chanced upon a throwback photo of Vidya Balan from her childhood. The actress rarely shares glimpses of her childhood and that's why this photo is special in many ways. Vidya, while interacting with her fans during an 'Ask me anything' session on Instagram on Monday, fulfilled a fan's wish and posted a photo from when she was a baby. The black and white picture features little Vidya Balan wearing what appears to be a frock and sporting curly hair. She looks cute as a button while looking at the camera. Vidya, who is a renowned actress in Bollywood, made our day with this amazing throwback gem.

Check out her photo from her childhood here:

Vidya Balan started her career in the entertainment industry with the 1995 sitcom Hum Paanch. Before stepping into Bollywood, she appeared in music videos for performers like Euphoria, Pankaj Udhas and Shubha Mudgal. Vidya made her Bollywood debut with 2005's Parineeta, in which she co-starred with Saif Ali Khan ad Sanjay Dutt.

She went on to feature in movies like Lage Raho Munna Bhai, Guru, Paa, Heyy Babyy, Bhool Bhulaiyaa and The Dirty Picture, all of which fared well at the box office.

Vidya delivered an outstanding performance in the 2012 film Kahaani. She even won the Filmfare Award for the Best Actress for her role in the film.

She actress was last seen in a film based on the life of mathematician Shakuntala Devi. Vidya played the titular role. Her upcoming film Sherni will premiere on Prime Video this month.