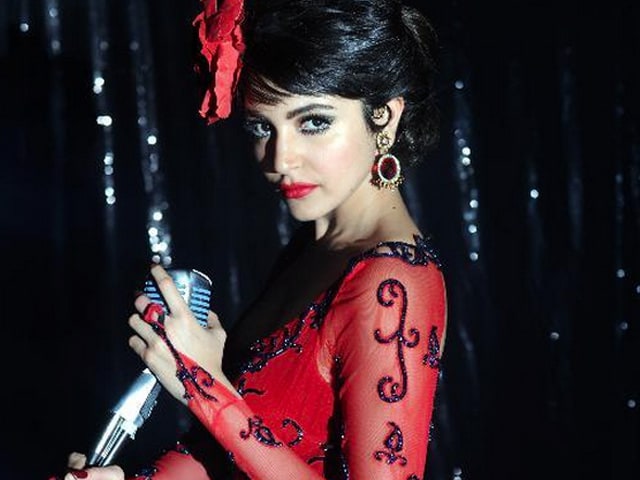 This image was posted on Twitter by Anushka Sharma

Panaji: The 1959 Nanavati case that had everyone in India caught up in its racy plot has inspired Sylvia, a song in Anurag Kashyap's upcoming film Bombay Velvet.

Performed by Anushka Sharma's character Rosie and sung by Neeti Mohan, the song comes at a crucial moment in the movie. (Also Read: Anushka's Betrayal of Ranbir in Bombay Velvet's Naak Pe Gussa)

During the musical event last night, the director explained the history behind the number. "Sylvia was the name of Nanavati's wife. The song is inspired by the tabloid perception of the story," said Kashyap.

Earlier, in an interview to PTI the director revealed his struggle to bring the story on the big screen and how they managed to finally scale it down. Still Bombay Velvet is Anurag's most expensive film till date.

"When we were planning to make the film in 2009 with Aamir, the budget was coming around Rs 160 crore. It was not even feasible because films were not earning that much. We scaled the cost down," he said.

The film's delay generated some bad publicity but Anurag is confident that once people watch it, they will love the world that has been created on the screen. "It is Ranbir's best work. For the first time his father loved any of his films while his mother hugged me and told me that this brings the best in her son."

Ranbir said the film was not even offered to him, he called up the director because it is rare to be a part of something like this.

Promoted
Listen to the latest songs, only on JioSaavn.com
There are references of that era, be it a Cary Grant picture hanging in Johnny Balraj's club or the scene where Ranbir comes out holding guns in both hands, a la Tony Montana of Scarface.

"There are many such references because both Anurag and I are fans of that world, Martin Scorsese, Al Pacino. These little references are our tribute," Ranbir said.