"They Say I Had Affairs, Abortions": Samantha Ruth Prabhu On "False Rumours"

Samantha Ruth Prabhu requested for time to "heal," vowing that nothing can "break" her spirit 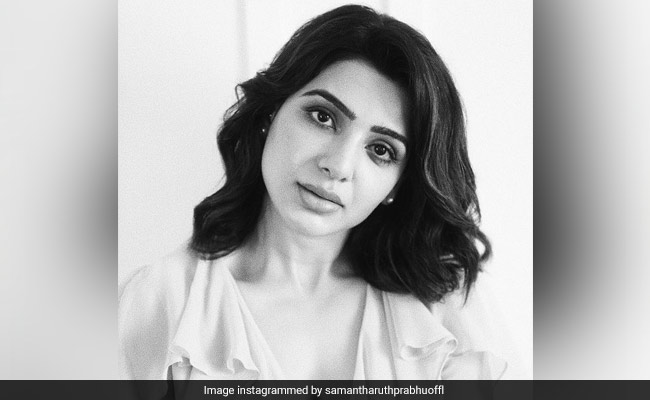 Actress Samantha Ruth Prabhu has addressed speculation surrounding her separation from Naga Chaitanya in a powerful statement. Sharing a lengthy note on her Instagram stories on Friday, Samantha Ruth Prabhu responded to rumours about "affairs," family planning and alleged abortions, dismissing them as "false." Thanking her fans, who have voiced their support for Samantha after she and Naga Chaitanya announced they were separating, the actress wrote: "Your emotional investment into a personal crisis has overwhelmed me. Thank you all for showing deep empathy, concern and for defending me against false rumours and stories that are being spread. They say I had affairs, never wanted children, that I am an opportunist and now that I have had abortions."

The 34-year-old actress requested time to "heal," vowing that nothing can "break" her spirit: "A divorce in itself is an extremely painful process. Let alone allowing me the time to heal. This attack on me has been relentless. But I promise you this, I will never allow this or anything else they say, break me." 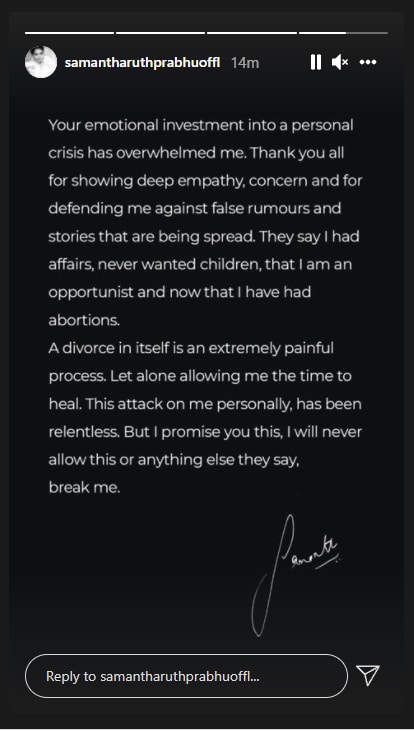 Last week, Samantha Ruth Prabhu and Naga Chaitanya confirmed the split by issuing statements on their respective Instagram profiles. The statement by the actress read: "To all our well-wishers. After much deliberation and thought Chay and I have decided to part ways as husband and wife to pursue our own paths. We are fortunate to have a friendship of over a decade that was the very core of our relationship which we believe will always hold a special bond between us. We request our fans, well-wishers and the media to support us during the difficult time and give us the privacy we need to move on. Thanking you for your support." The couple were hit by rumours of divorce for several weeks before their announcement.

Naga Chaitanya's father, south megastar Nagarjuna, reacted to the separation announcement in a tweet, writing: "With a heavy heart, let me say this - what ever happened between Sam and Chay is very unfortunate. What happens between a wife and husband is very personal. Sam and Chay, both are dear to me. My family will always cherish the moments spent with Sam and she will always be dear to us. May god bless them both with strength."

Samantha Ruth Prabhu and Naga Chaitanya's separation announcement arrived just a few days before what would have been their fourth wedding anniversary on October 6.

To Birthday Boy SS Rajamouli, With Love From Team RRR