The Stunning Interiors Of Rhea Kapoor And Karan Boolani's Mumbai Home. Pics Inside

"The place Karan Boolani and I rent together with our dog babies has made us better partner," wrote Rhea Kapoor 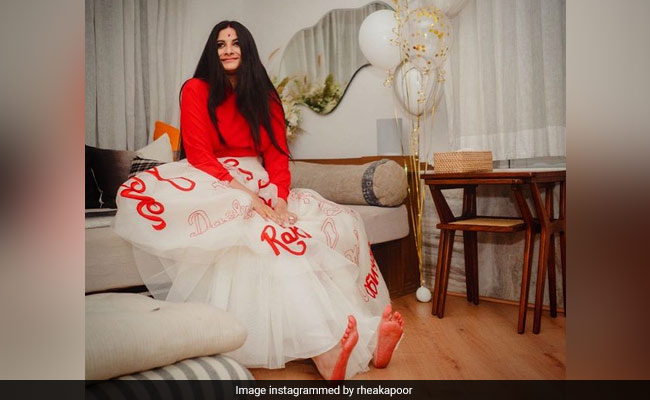 Film producer and entrepreneur Rhea Kapoor usually loves to share pictures of her dinner spread. This time, however, she made an exception by sharing pictures of her stunning house in Mumbai. Rhea Kapoor recently featured on the cover of Vogue magazine, as a part of which she shared visuals of a home that she rents with her husband Karan Boolani in Mumbai. She captioned one of the posts: "The Kapoor's and Boolani. The place Karan Boolani and I rent together with our dog babies has made us better partners, better friends and has filled me with love, patience and gratitude."

Rhea Kapoor, who loves to host dinners and lunches for her family and friends, shared pictures of one of her favourite corners.

Here's the master bedroom - Rhea's "favourite room in the house."

Film producer Rhea Kapoor  married Karan Boolani in August this year. They had been together for over 12 years. They got married at Anil Kapoor's Juhu bungalow, in the presence of a few family members. Apart from being a film producer, Rhea Kapoor is also a stylist (largely for her sister Sonam Kapoor). She has co-produced films such as Aisha, Khoobsurat and Veere Di Wedding, all three starring Sonam Kapoor. The sister-duo also runs an apparel brand called Rheson, which was launched in 2017.

Rhea recently launched her ice-cream brand as well. Karan Boolani worked as an assistant director with Rhea Kapoor on the 2010 film Aisha.