The ROFL Story Of Vijay Varma's Vaccination: "The Doc Had No Time For My Drama"

Vijay Varma shared a series of ROFL photos, in one of which he can be seen making a face, a scared one, and then one of no expression 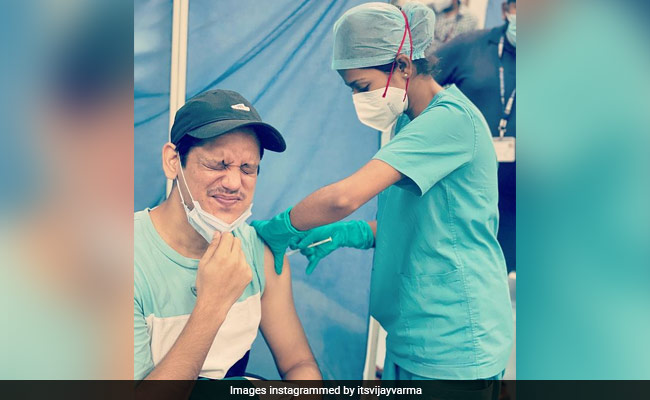 Actor Vijay Varma has received both his shots of COVID-19 vaccination - something which he revealed in his latest Instagram post. However, receiving his second dose of vaccination was not the highpoint of his day - it was this ROFL incident, which he wrote about in his Instagram post. Looks like Vijay Varma has a thing for theatrics. At the vaccination center, he felt the need to lose his original persona and play a character, just to casually exercise his acting skills, you know. The role he played was one of a trypanophobic, someone who has an extreme fear of medical procedures involving injections. And what happened after will leave you in splits.

Vijay Varma shared a series of ROFL photos, in one of which he can be seen making a face, a scared one, and then one of no expression. Explaining his photos, Vijay Varma wrote: "I played a very convincing trypanophobic I would say but the doc here had no time for my drama." Thanks to the doctor, Vijay Varma is now "fully vaccinated." Needless to say Vijay Varma's post left his Instafam in splits.

Vijay Varma is best known for playing supporting roles in films such as Pink, Gully Boy, Manto, Super 30 and Baaghi 3. Apart from his film roles, Vijay Varma has played interesting roles in a handful of web shows in the recent past - the list includes A Suitable Boy, She and Mirzapur. In terms of work, Vijay Varma was last seen in the science fiction web show OK Computer, which released earlier this year.