The Oscars Were About Race, Equality and Acceptance 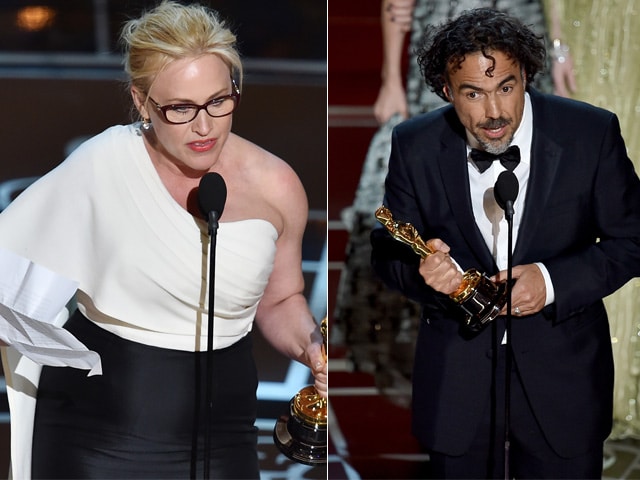 As actor Neil Patrick Harris floundered through a sea of poor jokes in his debut performance as Oscar host, a bunch of really great speeches from the winners provided a safety net for him to bounce off, addressing issues of race, equality, homosexuality, suicide and immigration. (Also Read: At Oscars, Passionate Speeches, But Few Surprises)

This year, apart from thanking God and family, the standout Oscar speeches brought to the show the diversity it had been lacking and the absence of which was criticized and commented on endlessly in the weeks leading up to Oscar day.

Neil Patrick Harris attempted at least twice to reference the 'whiteness' of the show and the overlooking of African-American civil rights film Selma in the nominees list. He began the show with "Tonight, we celebrate Hollywood's whitest, sorry brightest" and later followed up with "Oh sure, now you like him" when he stopped to speak to British actor David Oyelowo whose performance as Dr Martin Luther King Jr was snubbed for a Best Actor nomination. But it was the stirring, impassioned speech delivered by musicians Common and John Legend, who won Best Original Song for Glory from Selma, that was a compelling reminder that the fight for racial equality is far from over. Selma is NOW. (Also Read: Neil Patrick Harris Mocks White Oscars in Funny Musical Opener)

"Recently, John and I got to go to Selma and perform it on the same bridge that Martin Luther King walked over. Once a landmark of a divided nation, the spirit of this bridge now for all people regardless of race, gender, sexual orientation or social status. This bridge was built on hope and welded with compassion," Common said. John Legend continued, "We wrote this song for a film that was based on events that were 50 years ago," he said, "but we say Selma is now, because the struggle for justice is right now. We know that the voting rights, the act that they fought for 50 years ago is being compromised right now in this country today," Legend said. "We know that right now the struggle for freedom and justice is real. We live in the most incarcerated country in the world. There are more black men under correctional control today than were under slavery in 1850. When people are marching with our song, we want to tell you that we are with you, we see you, we love you, and march on."

Red carpet sexism was raised by actress Reese Witherspoon who said "we're more than our dresses," and a social media campaign to #AskHerMore than simply which designer each actress was dressed in. Best Supporting Actress Patricia Arquette called for a correction of the gender imbalance in Hollywood salaries, ending her speech with, "To every woman, we fought for everybody else's equal rights. It's our time to have wage equality once and for all." In the audience, Meryl Streep and Jennifer Lopez jumped out of their chairs, shouting "Yes. Yes." (Also Read: It's Time to have Wage Equality, Says Patricia Arquette)

"Stay weird, stay different," said The Imitation Game writer Graham Moore in his speech accepting the Oscar for Best Adapted Screenplay. "When I was 16-years-old, I tried to kill myself because I felt weird and I felt different, and I felt like I did not belong. And now I'm standing here, and so I would like this moment to be for this kid out there who feels like she's weird or she's different or she doesn't fit in anywhere: Yes, you do. I promise you do," Graham said in his moving plea for acceptance. The Imitation Game is based on the life of World War II code-breaker Alan Turing who was ultimately prosecuted and punished for being gay.

Filmmaker Laura Poitras explained why it had been important to tell whistleblower Edward Snowden's story in her Oscar-winning documentary CitizenFour. "The disclosures that Edward Snowden reveals don't only expose a threat to our privacy but to our democracy itself. When the most important decisions being made affecting all of us are made in secret, we lose our ability to check the powers that control. Thank you to Edward Snowden for his courage, and for the many other whistleblowers," Ms Poitras said. The American Civil Liberties Union, which represents Edward Snowden and is seeking clemency for him, released a statement from him on their website which reads: "When Laura Poitras asked me if she could film our encounters, I was extremely reluctant. I'm grateful that I allowed her to persuade me. The result is a brave and brilliant film that deserves the honor and recognition it has received. My hope is that this award will encourage more people to see the film and be inspired by its message that ordinary citizens, working together, can change the world." Mr Snowden is currently living in Russia, under temporary asylum, after leaking classified information about the American National Security Agency in 2013.

Filmmaker Dana Perry, whose Oscar-winning documentary short dealt with a crisis helpline for suicidal war veterans, spoke about the importance of making voices heard. "We need to talk about suicide out loud to try to work against the stigma and silence around suicide because the best prevention for suicide is awareness and discussion and not trying sweep it under the rug," said Ms Perry who also spoke about her own son having killed himself as a teenager.

Alejandro Gonzalez Inarritu, the second Mexican to win Best Director after Gravity's Alfonso Cuaron last year, reminded America that it was a nation of immigrants, saying of Mexicans living in the USA, "I just pray they can be treated with the same dignity and respect of the ones that came before and built this incredible, immigrant nation.'' Moments before, presenter Sean Penn joked as he read out Mr Inarritu's name as winner, "Who gave this son of a bitch his green card?" (Also Read: Mexico President Hits Back at Director Alejandro Inarritu's Oscar Comments )

Promoted
Listen to the latest songs, only on JioSaavn.com
He also urged his countrymen back home to "find and build a government we deserve," prompting Mexican President Enrico Pena Nieto to respond later with "As a country, it brings us pride to know that Mexicans can triumph - here and outside Mexico - because as a government it's our job today to make things better."

Mr Inarritu's film Birdman was the biggest winner at the Oscars, which were held in Los Angeles' Dolby Theatre on the evening of February 22.