The Office India's Pammi And 'Punjabi Dad Jokes' Enrage Twitter. It's A Bloodbath

Indian version of The Office is now streaming on Hotstar and the verdict is out on Twitter. It's not pretty. 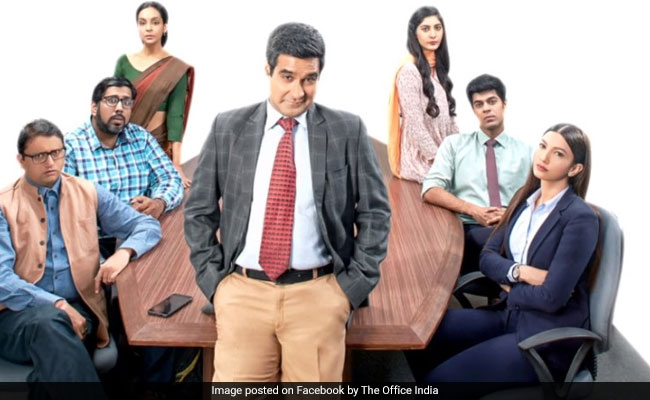 An Indian version of cult TV series The Office never did seem like the most inspired idea. The show is now streaming on Hotstar and the verdict is out on Twitter. It's not pretty. The Office was originally created by British comedians Ricky Gervais and Stephen Merchant; an American version followed - both were wildly successful. Ricky Gervais and Steve Carrell played the central character - a well-intentioned but completely clueless general manager - in the UK and US series respectively. The Office, as we've already noted, is cult as are its characters - moving the setting to a Faridabad milieu was never going to end well; for a start, it's Fawlty-esque humour is difficult to translate for Indian sensibilities. For another, the original series and it's US version were both made in the early 2000s; much of what was considered funny then might not get the laughs in a more politically correct 2019.

On Twitter, it's a bloodbath. Actor Mukul Chadda, who takes over boss duty from Ricky Gervais and Steve Carrell, has been singled out for overacting. Mr Gervais and Mr Carrell played their essentially obnoxious characters - David Brent and Michael Scott - with a comedic genius that allowed audiences not only to laugh at them but very often with them. Mukul Chadda had a hard act to follow and Twitter doesn't think he's up to it. Fans have also skewered The Office India's 'Punjabi dad jokes,' the lazy naming of Pammi based on Jenna Fischer's character Pam from the The Office US and the 'sanskaari vibes.'

They have replaced Michael's jokes with punjabi dad jokes. Rest of the dialogues are just directly translated into Hindi.

I am sure they have used the same subtitle file as the @theofficenbc.

So Indian version of The Office is out, three minutes into the first episode and -

1. The intro is like a bhajan
2. The boss sucks
3. PAM IS LITERALLY CALLED PAMMI
4. It's induced a kind of gag reflex & I feel uncomfortable af
5. EVERYTHING IS WRONG#TheOffice#theofficeindia

Lost a bet just now. Couldn't even survive the first 5 minutes of #TheOfficeIndia Can't say about the people who are being introduced to "THE OFFICE" franchise for the first time but surely it is not for Michael Gary Scott or David Brent fans.

9.the most annoying thing is the camera stability & the lack of the shaky rusty movements of an actual camera crew being there.

10. Way too much sanskaari vibes here already, I wouldn't be surprised if they made thoe to cater & steal audience from Kapil sharma#theofficeindia

Difference between #TheOfficeIndia & #TheOfficeUS is like someone just made Maggi and calling it Lasagna !

Michael Scott was invoked in many tweets:

Chaddha is over doing it! #TheOfficeIndiapic.twitter.com/vZJuiTMRp6

There can only be one JAM ( Jim + Pam). No one will come close to recreating their relationship! #TheOfficeIndiapic.twitter.com/CiVesyWXm9

Me looking at Indian Dwight and over the top Punjabi Dad joke#TheOfficeIndiapic.twitter.com/ihMSJsYykH

Fans of the original The Office were never going to like an Indian version.

Wish I lived in a world where #TheOfficeIndia didn't exist..

There are some tweets calling the dreadful reviews unnecessarily harsh: it's not as bad as it could have been, say some tweets - expectations were plainly rock bottom.

The Office UK and US made stars of its fantastic casts - Ricky Gervais, Martin Freeman, Lucy Davis and Mackenzie Crook in the original; Steve Carrell, Jim Krasinski, Jenna Fischer, Rainn Wilson and BJ Novak in the American version. The Office US also boasted a who's who list of actors appearing in smaller roles - from Mindy Kaling to Randall Park.