Govinda and Sunita Ahuja on The Kapil Sharma Show

New Delhi: Actor Govinda and wife Sunita Ahuja appeared on The Kapil Sharma Show to promote his new film Aa Gaya Hero and Mrs Ahuja revealed that when she was pregnant, she used to place the photos of two famous actors next to her in the hope of ensuring her child would be good-looking like them. The actors? Not her husband, but Sholay co-stars Amitabh Bachchan and Dharmendra. It seems she got what she wished for. Govinda and Sunita Ahuja are parents to daughter Tina and son Yashvardhan, whose looks were reportedly commented on by politician and former cricketer Navjyot Singh Sidhu, a permanent fixture on The Kapil Sharma Show. That's when the backstory was revealed.

"Sunita mentioned that when she was pregnant, she used to have the pictures of the two Bollywood stars. Govinda, Kapil Sharma, Sidhu and everyone present on the set could not hold their laughter," a source from The Kapil Sharma Show told news agency IANS.

The eventful episode of The Kapil Sharma Show also featured a surprise guest - actor Shakti Kapoor, with whom Govinda has co-starred in over 40 films, made an impromptu appearance and took some fun pictures: 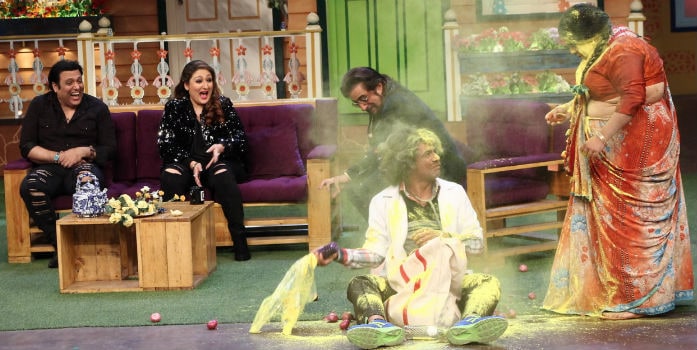 Shakti Kapoor and Kiku Sharda in The Kapil Sharma Show

Govinda, who was the top actor in the Nineties, married Sunita Ahuja in 1987. Their daughter Tina has appeared in two Bollywood films.

Govinda, 53, makes a self-produced comeback in new film Aa Gaya Hero, which released today. Star of such '90s blockbusters as Hero No 1, Coolie No 1 and Raja Babu, the actor's film career slid after he shifted focus to politics in 2004. Govinda joined the Congress and was elected to the Lok Sabha. He quit four years later, amid stiff criticism for inactivity in his constituency and prolonged absences from Parliament.

Promoted
Listen to the latest songs, only on JioSaavn.com
Last seen in supporting roles in films like Happy Ending and Kill Dil, Govinda now plays the lead again in Aa Gaya Hero.