The Kalank Meme-Fest, Courtesy Twitter. Here Are The Funniest

After these Kalank memes, you will find yourself rolling on the floor, laughing. 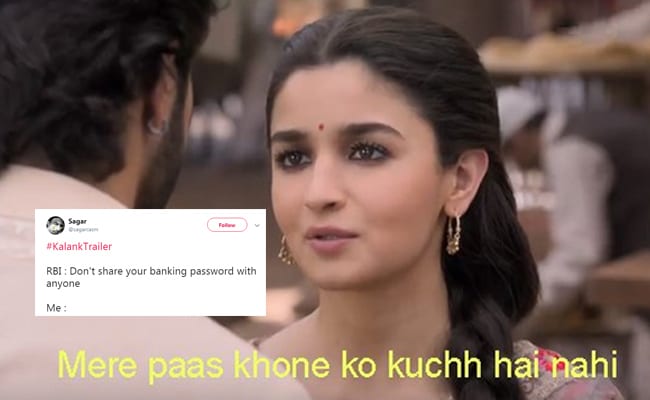 Kalank trailer released on Wednesday and then this happened (courtesy Twitter)

Alia Bhatt and Varun Dhawan, along with the film's team, launched the trailer of Kalank at a blockbuster event in Mumbai. Little did they know (or maybe they did) that several moments from the trailer of Kalank will give rise to innumerable memes. Netizens have particularly picked out a few scenes as meme-worthy. First one is when Varun Dhawan (Zafar) asks Roop (Alia Bhatt): "Himmat hai mere duniya mein kadam rakhne ki?" before embarking on a self-destructive journey of romance. The second favourite is Roop's response: "Mere paas khone ko kuchh nahi hai." And the third one is the Dilwale Dulhania Le Jayenge-like train scene between Alia, Varun and Aditya Roy Kapur. Oh, and there's also the one scene in which Dev Chaudhry (Aditya) tells Roop: "Iss rishte mein izzat hogi par koi pyaar nahi hoga."

The reason why I accept all terms and conditions without reading it#KalankTrailerpic.twitter.com/E5tRQfbq31

Happens all the time pic.twitter.com/7Cp012OCAb

Whenever there is a sale in mall: pic.twitter.com/eZplPQaaNd

When relative gives me money..#KalankTrailerpic.twitter.com/yq6nGKN2o8

Me to diet food pic.twitter.com/Ffr7Tu04au

Mom : if you don't go out at all, you won't be left with any friends

The trailer of Kalank revealed the film to be a love saga - Roop is married off to Dev Chaudhry, who, already in love with his first wife, can't promise marital bliss to his new bride. Roop is easily wooed by the daredevil Zafar's way of life and ventures onto an illicit journey of love.

Directed by Abhishek Varman, Kalank is set in the pre-independence era of 1945. Kalank is special in many ways - it marks Alia Bhatt's fourth film with Varun Dhawan; Madhuri Dixit reunites with Sanjay Dutt after two decades and that the film was conceptualised 15 years ago and is the last film that Karan Johar's father Yash Johar worked on before his death.

Get introduced to the world of Kalank in theatres on April 17.