The Juiciest Bits From Jada Pinkett And Will Smith's Facebook Show 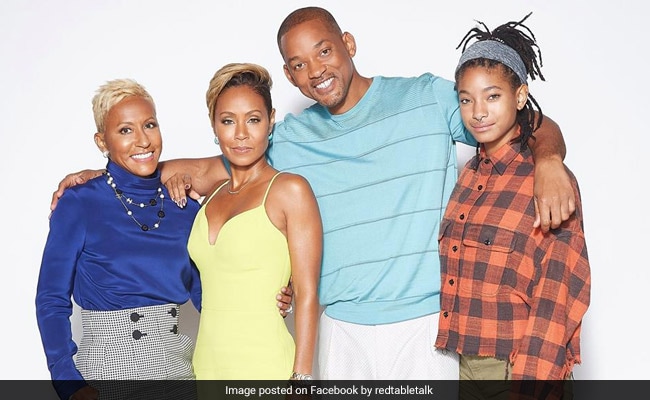 The juiciest bits are in Monday's episode, Our Unique Union (courtesy redtabletalk)

For years, rumors have swirled around Will and Jada Pinkett Smith. Are they secretly Scientologists? Do they have an open marriage? And what's with their kids, Jaden and Willow, who once told the New York Times that their voices together sound "as good as chocolate tastes"?

Some of the mystery is starting to unravel around a glossy red table at their home in Malibu, where Jada has carved out a distinct space in TV's ever-expanding talk show landscape. Her Facebook Watch show, Red Table Talk, features intimate and complex conversations that offer a glimpse into the lives of one of Hollywood's most famous families.

The show, which boasts more than 3.5 million followers, according to Facebook's public metrics, is built around conversations between Jada; her mother, Adrienne Banfield-Norris; and 17-year-old Willow. The trio contributes multigenerational perspectives to topics including body image and sex. ("My introduction to sex was obviously walking in on you and Daddy," Willow reveals in the sex-themed installment.) Episodes also feature a guest, who usually occupies a special place in the Smith family orbit.

In the first episode of the series, which launched in May, Jada discusses motherhood with Will's ex-wife, Sheree Fletcher. The two women talk about their blended family - Jada is stepmother to Fletcher's son, Trey - and the tension they navigated when Will began dating Jada immediately following his divorce from Fletcher.

Other guests have included her Girls Trip co-star Tiffany Haddish, who talked about her meteoric rise to fame, Jada's longtime friend Cesar Millan (who discussed coming to the United States illegally) and the actress Gabrielle Union, who confronted her strained relationship with Jada - and the fact that, after years of navigating the same Hollywood circles, neither could remember the source of their issues.

Jada has also hosted Jaden, 20, for a parenting episode in which she revealed that Will had struggled with their son's habit of wearing skirts (as he did in a widely circulated Louis Vuitton ad). But the most high-profile guest so far is her famous husband, who appears in a two-part episode about their gossip-inducing marriage.

The first installment, titled Becoming Mr. and Mrs. Smith, premiered last week, with the couple discussing their early relationship and a particularly low point in the 20-plus years they've been together. (Facebook's public metrics tally the episode's views at around 12 million.) But the juiciest bits are in Monday's episode, Our Unique Union.

The episode stops short of acknowledging an open relationship. But Will, who effusively denied the couple was getting a divorce in a widely shared 2015 Facebook post, admitted they faced a breaking point in 2011, shortly after Jada's 40th birthday. Will had planned an extravagant party, which fit into a pattern of him going all out to make her happy without asking her what she truly wanted.

The result, following an explosive confrontation that drove Willow to tears, was to essentially destroy their marriage.

"We broke up within our marriage and got back together again," Will explains. "And had to rebuild with new rules and something way, completely different."

And while Jada says divorce is truly the best decision for some couples, the Smiths say it's not an option for them. "We don't have any dealbreakers," the couple says in unison. There are no secrets between them: "We could break a red table with some of the stuff we talk about," Will jokes.

The episode does definitively clear up a few rumors: They aren't Scientologists. Or swingers. ("That's a specific lifestyle," Jada explains.)

It's a shrewd business move for the Smiths to acknowledge and address long-standing rumors about their family in a format they can control. That said, there's an authenticity woven throughout the episodes that makes Red Table Talk stand out amid a surplus of celebrity-hosted talk shows. Willow refers to her parents as Mommy and Daddy. Banfield-Norris is usually lovingly referred to as Gammy or Gam. The women and their guests exchange thoughtful stares and exclamations - "mmmmm," "wow!" and, Jada's favorite, "THAT part!"

And the topics are so relatable that it's easy to forget just how famous and wealthy the Smiths are - almost. ("For safety reasons, all of the cars, including mine, need to have trackers in them," Jaden declares in the parenting episode.)

It's clear that Red Table Talk is resonating with people. A month after the show's premiere, Facebook ordered an additional 13 episodes, which launched with the marriage installments. Upcoming episodes will feature a discussion about interracial relationships (with Grey's Anatomy star Ellen Pompeo) and more on those Scientology rumors in an installment featuring "Scientology and the Aftermath" host Leah Remini.

And as viewers connect to Red Table Talk, it appears that the show has been cathartic for the Smith family, as well.

"You have found something with this red table and this space that I tried my damnedest to build for you," Will tells Jada in Our Unique Union, "the space where you get to fully and honestly and thoroughly be you and to get all of the love and the praise that you deserve."