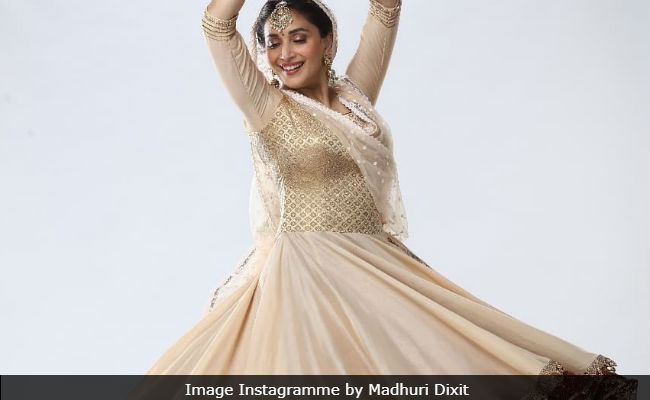 Madhuri Dixit being her stunning self. (Image courtesy: madhuridixitnene)

We simply love it when Madhuri Dixit delights us with her Instagram post, be it sharing throwback pictures or simply posting pictures from her family vacations and her latest Instagram post is not an exception. We are not quite sure if the aforementioned post is a throwback picture or a recent one but we simply loved it. On Thursday, Madhuri shared a picture of herself dressed in a cream and red Anarkali suit and she looks simply stunning. Madhuri Dixit captioned her post: "Perseverance pays... a lot! Dance like there's no tomorrow." Just like us, the actress' Instafam was smitten by the photograph and the comments on the post prove that. The picture received over 1 lakh likes on Instagram within a few hours. The comment section was replete with remarks such as "so graceful," "love that smile." Another fan wrote: "Mam, you are the queen of expressions."

Perseverance pays... a lot! Dance like there's no Tomorrow

There's a child inside all of us. Never let that spirit die! Do what you love, always.Happy #ChildrensDay

Last night at the launch of @zeekeralam, doing what makes me the happiest!!

When work is fun! Things we do to keep everyone motivated on the sets of #BucketList after a long night schedule. And some bonds never grow old! @renukash710 @bucketlist_film is releasing next Friday, 25th May. Mark your calendar. #Repost @karanjohar (@get_repost) Reliving the magical #humaapkehainkaun moment! @madhuridixitnene and @renukash710 on the sets of #bucketlist !!! Releasing on Friday the 25th of May!!!!

Madhuri Dixit has been associated with several dance reality shows. She has appeared as a judge on shows like Jhalak Dikhhla Jaa, So You Think You Can Dance and Dance Deewane. She even shared videos from the sets of the show.

Madhuri Dixit is best-known for her performance on songs such as Ghaghra, Devdas's Maar Dala, Ek Do Teen from Tezaab and Choli Ke Peeche Kya Hai from Khalnayak among others.

On the work front, Madhuri Dixit voiced Mowgli's wolf mother Nisha in Netflix's Hindi version of Mowgli: Legend Of The Jungle. She will next be seen in Indra Kumar's Total Dhamaal, co-starring Anil Kapoor and Ajay Devgn and she has also been roped in for Abhishek Varman's Kalank in the role that Sridevi was originally cast in.