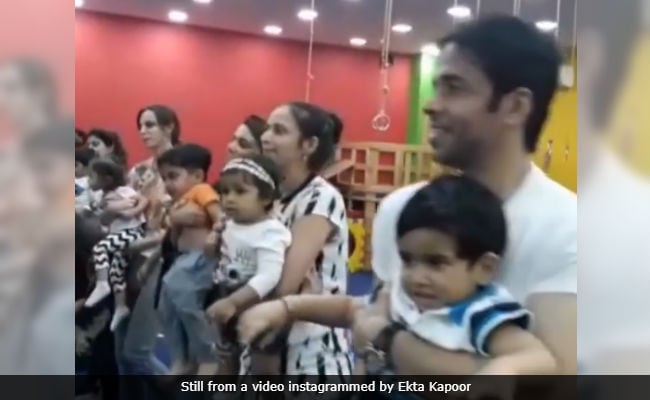 New Delhi: Actor Tusshar Kapoor is setting 'daddy goals' going by Ekta Kapoor's latest Instagram video. The television czarina posted a video of Tusshar participating with his toddler son Laksshya at his play school activity. Tusshar is the only father in the long line-up of mothers. "With the mommies is my daddy no 1 #respect #bestfather," Ekta Kapoor captioned the video. Tusshar Kapoor, 41, became a single parent via IVF in June 2016. Tusshar activity carries Laksshya in his arms and danced with him as the instructor said. Tusshar Kapoor won the Internet's heart for being an involved father. The comments section of the post is filled with words of encouragement. "Daddies... wake up!! I'm in awe," read one comment. "Tusshar Kapoor, you are doing a dual role which is next to impossible. My high regards to you," said one Instagram user.

Take a look at Tusshar and Lakksya's cute video here:

Ekta Kapoor regularly posts pictures of her nephew going about his day to day activities with some cute anecdotes. Like this 'Disco Dancer' picture of Laksshya:

I am a disco dancer !

To sum up, Laksshya rules the hearts of the Kapoor household.

Promoted
Listen to the latest songs, only on JioSaavn.com
Tusshar Kapoor was last seen in Golmaal 4, which was a commercial success. He hasn't announced his next project yet but the actor told news agency IANS that Laksshya is okay when he leaves for work. "He doesn't have too much separation anxiety. He knows the time when I am going. I spend my time with him in the morning. When I say goodbye, he understands. Sometimes, when I am there with him, he is extra naughty. He should be used to separation also," he told IANS.