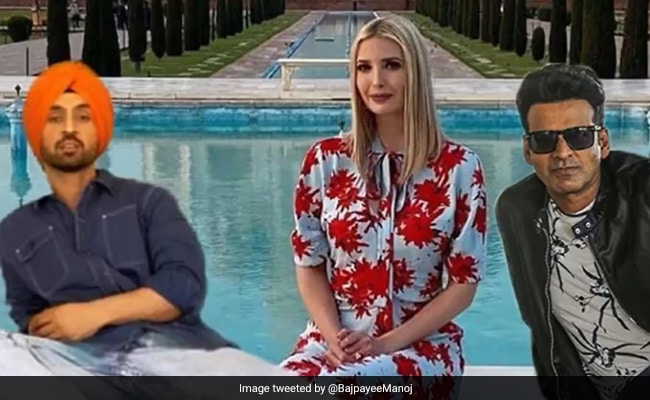 Bollywood actor Manoj Bajpayee took a leaf out of Diljit Dosanjh's ROFL edit with US President Donald Trump's daughter and senior advisor to his administration - Ivanka Trump. On Tuesday, the 50-year-old actor shared an edited video on his Twitter profile, in which he photoshopped himself and Diljit Dosanjh with Ivanka Trump. Wait! It gets better. The actor photoshopped himself in the pictures of Kylie Jenner, Jennifer Lopez, Beyonce, Katy Perry and Queen Elizabeth II, and he shared a compilation of it on Twitter. He captioned the post: "Hum hai Mangal aur padenge hum sab pe bhari! Suraj pe mangal bhari." Diljit retweeted Manoj Bajpayee's post. He wrote: "Sir" and added an LOL emoji to it.

For the initiated, the Photoshop fever began with Dilijit Dosanjh's post over the weekend. The singer-actor chanced upon a photograph of Ivanka Trump's Taj Mahal visit and he photoshopped himself into it. "Me and Ivanka. Piche hee pey aaee, kehndi Taj Mahal kana, Taj Mahal jana... Mai fer ley geya hor ki karda (She was after my life to take her to Taj Mahal. So I took her, what else could I have done)?" He wrote.

The post garnered a response from Ivanka Trump. She retweeted Diljit Dosanjh's post and she wrote: "Thank you for taking me to the spectacular Taj Mahal, Diljit Dosanjh! It was an experience I will never forget!"

Thank you for taking me to the spectacular Taj Mahal, @diljitdosanjh!

Manoj Bajpayee, who has starred in several critically-acclaimed films such as Shool, Zubeidaa and Pinjar, was last seen in the web series The Family Man. In terms of films, Sonchiriya remains his last release.