The Archies: Tara Sharma Gives A Shout Out To Khushi Kapoor And Suhana Khan. Shares A New Update

"I am so impressed by all your warmth, professionalism, talent and humilty ah and sense of fun. All you kids!" wrote Tara Sharma 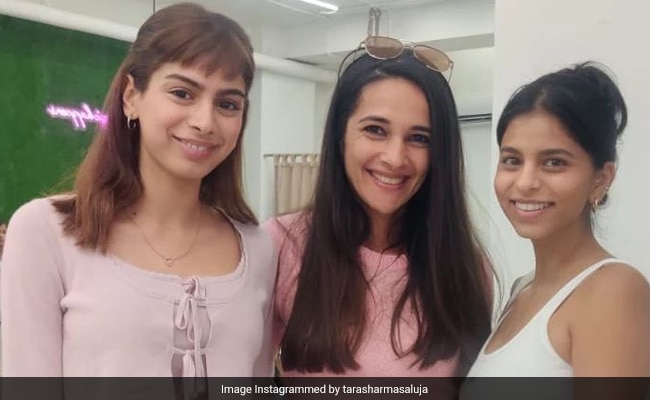 Actress Tara Sharma shared a late birthday post for Khushi Kapoor, but it's worth it as she has shared a picture from the sets of The Archies, featuring her with Khushi and Suhana Khan. In the image, all three are flashing their beautiful smiles as they pose for the camera. Khushi looks pretty in a crop top and jeans, while Suhana can be seen in a white tank top. Tara looks cute in a pink crop top paired with blue jeans. Along with a photo, she wrote a long note sharing her experience working with them. Also, in the note, Tara revealed that she is part of the film too, but she has a short role as a mother. She began her note with these words, "A very #HappyBirthday and lots of good wishes lovely @khushi05k love from us all...fab @suhanakhan2 in the pic too Not on set so not revealing anything but suffice to say it is a pleasure working with and getting to know you lovely ladies and all the rest of the fab cast and crew too."

Tara added, "Agastya Nanda, Mihir Ahuja, Vedang Raina, Yuvraj Menda, Dot, Rudra, Santana, all of you kids and the rest too (being a b'day post, and with this pic, only mentioning you guys but of course there are many more dear friends and colleagues in ths too!) My role is only little so time spent, not huge, but in the time we spend together, must say I am so impressed by all your warmth, professionalism, talent and humilty ah and sense of fun. All you kids!"

She continued, "Acha I am sounding like an Aunty now so I better zip it haaha. Hope The Archies is a big success touch wood. Lots of love PS My standard joke when asked about the film is 'I'm not Betty, I'm not Veronica, I'm a Mother!' Said in a shocked, screachy way that annoys our kids haaha! As ofcourse in my heart I still feel as young. But in all honestly you guys are so perfect in and for these roles, that I don't think anyone else would do them justice. And ofcourse with fabulous director Zoya and all the fab team."

She concluded her note with these words, "Anyone guessing who's Mum I play? Hint: not one of these in the pic but someone I am very fond of too and would shower all this praise onto too! And probably have a joke played on me in return haaha! #staysafe"

The Archies marks the debut of Suhana Khan, Khushi Kapoor and Agastya Nanda. It is slated to release next year on Netflix.

For Anissa Malhotra, Birthday Wishes From Kareena And Other Kapoors