Suhana Khan And Khushi Kapoor Share Birthday Notes For Zoya Akhtar: "Thanks For Putting Up With Us" Zoya Akhtar, who celebrated her fiftieth birthday on October 14, got special wishes from the stars of her upcoming film The Archies. Shah Rukh Khan's daughter Suhana Khan and Boney Kapoor's daughter Khushi Kapoor, who are all set to make their Bollywood debut with Zoya Akhtar's The Archies shared special notes for the filmmaker on their respective Instagram handles. Suhana Khan shared a monochrome picture of Zoya Akhtar on her Instagram story on Friday night and wrote, "Happy birthday Zoya Akhtar. Thanks for putting up with us. Love you lots" with a red heart emoji. Whereas, Khushi Kapoor on Saturday morning, shared a belated birthday post for the filmmaker on her Instagram story. Sharing a picture of Zoya, Khushi wrote, "Late birthday post for the best. Thank you for being you. Happy birthday" with a heart and angel emoji. 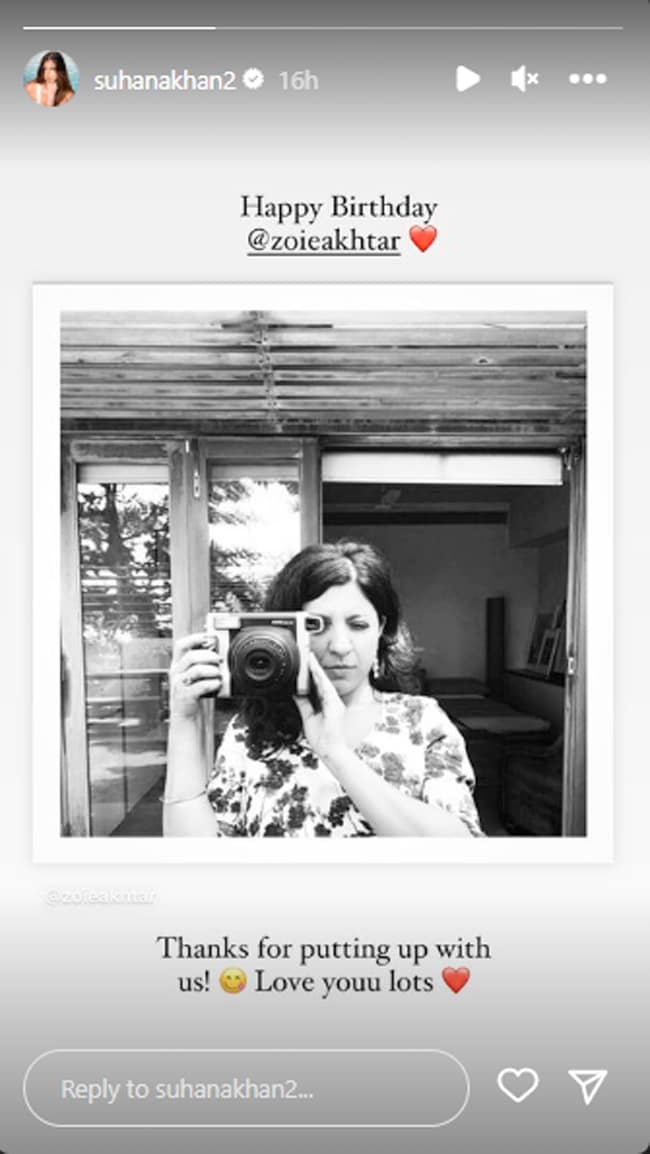 A few months ago, Zoya Akhtar announced her Netflix film The Archies. Its star cast includes Suhana Khan, Khushi Kapoor and Amitabh Bachchan's grandson Agastya Nanda among others, who will be marking their Bollywood debut with the film. A few weeks ago, the filmmaker shared a picture of her star-cast and wrote, "Someone asked to say Ar-cheese. Arriving soon, only on Netflix."

Here are the announcement posts of the film shared by Zoya Akhtar:

Suhana Khan is the daughter of Shah Rukh Khan and Gauri Khan, whereas Khushi Kapoor is the daughter of film producer Boney Kapoor with his second wife and late actor Sridevi. Khushi's sister Janhvi Kapoor and half-brother Arjun Kapoor are also Bollywood actors.

The Archies will have a direct-to-OTT release on Netflix.