Tanishaa Mukerji Is "Always On Her Phone, Even In Paradise." See Holiday Pic 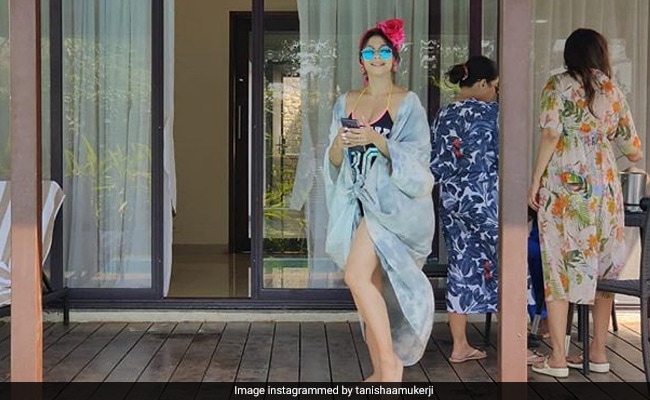 Tanishaa Mukerji would like to "Disconnect to reconnect", at least her latest Instagram post says so. The actress, on Thursday, posted a picture on her Instagram profile where she can be seen posing in a swimsuit as she holds her phone. Sharing the picture, the 42-year-old actress wrote, "Oof! Always on my phone, even in paradise. Gotta disconnect to reconnect." The Neal 'n' Nikki actress celebrated her 42nd birthday with her friends and mother Tanuja in Thailand. She has kept her Instafam busy with envy-inducing pictures from her trip. This is the picture we are talking about:

Oof! Always on my phone...even in paradise! Gotta Disconnect to reconnect!!!

Take a look at the pictures from Tanishaa's Thailand vacation:

Thank u my gorgeous girls for taking off for my birthday !!! And for planning this lovely day for me @utropicanaresort_

On the professional front, Tanishaa Mukerji will next be seen in the spy-thriller Code Name Abdul. Directed by Eshwar Gunturu, the film also stars Khatera Hakimi, Sumend Wankhade, Ashok Chaudhry and Akku Kulhari.

A few days ago, the 42-year-old actress shared the poster of Code Name Abdul on her Instagram profile and announced her association with the film. Sharing the poster, she wrote, "With much excitement and pride, I present to all of you a story of 4 RAW agents and their mission to capture the elusive terrorist. Code Name Abdul", releasing on April 24, 2020 in cinemas near you."

Tanishaa Mukerji made her debut in Bollywood with the 2003 horror-suspense thriller Sssshhh.... She had featured in movies such as Sarkar, Tango Charlie and Sarkar Raj among others. Tanishaa was last seen in the 2016 biographical film Anna: Kisan Baburao Hazare. Her upcoming film Code Name Abdul is slated to release on April 24.